Where it's at: I got two turn tables and a microphone 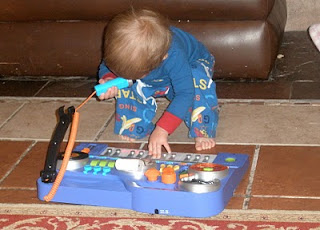 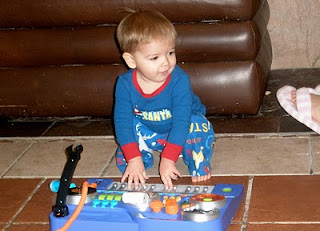 As my boys are getting older, I love seeing how their personalities develop. Even though Hudson wants to do everything just like his big Bubby, as he's racing toward his second birthday, we are really starting to notice some uniquely "Hudson" personality traits and they crack us up.
For example, music. Every fiber of Hudson's being loves music. Connor always enjoyed it as a toddler and now has a good time singing in his little church choir, but it's pretty easy to see that it is not one of his great passions. Those are geared more toward reading, performing and imaginative play. Hudson hears a song with his ears and feels it all the way down to his toes. Not only does he love to listen to music but he also loves to sing. We discovered this when he started using household items such as my hairbrush, the wand attachment to the vacuum and once, our dumbest dog's tail as a microphone. He has quite the repertoire of what we call the Mushy top 40. One might think that a one year old with a fairly small vocabulary might not have a wide range of musical numbers, but one would be wrong.
There is of course the classic starring his favorite word "Hi." You would be shocked at how long a kid can stretch out the word, "Hiiiiiiiiiiii," in a falsetto worthy of Michael Jackson. He also has a R&B remix of this song, in which he drops his voice 10 octaves and yells out, "Helllooooooo", repeatedly in different tones and volumes. Versatility is his middle name. Some of his other songs are what I like to refer to his as his power ballads, kind of one word dedications to the things he loves most in the world. The boxed set of these will include, "Cuuuuuuuuuuuupp," "Doooooooooggg," and my personal favorite, "Eaaaaaaattttttt!"
So this last Christmas, Matt and I lifted the embargo on battery powered toys in order to buy one "machine" for each of our boys. Connor got his beloved train set and Hud got a one man DJ station featuring a keyboard, turntables and you guessed it, a microphone. Needless to say it was a hit. Now he can not only sing to his heart's content on a "real" microphone, which he prefers to place directly inside his mouth, but he can also accompany himself on the piano or choose from one of the preset rhythms. His favorite is the techno beat. Sometimes we feel like we are only a couple of glow sticks away from a full on '90's rave featuring DJ Dribbles.
Since I have gone off on such a tangent about his singing ability I will have to leave dancing for another post on another day. Let's just say that in keeping with the white boy stereotype, Hudson's moves are almost entirely confined to his head and we have learned to either steer him clear of walls and corners or slap a helmet on his head.
The kid has some mad skills. (or would that be skillz)?
Posted by Unknown at 6:37 PM