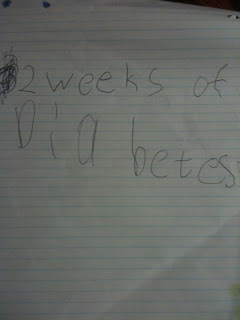 I was looking through Connor's note drawer, the place he keeps his beloved lists and journal pages and found this one sitting on top.  "Two weeks of Diabetes."  Those four words pretty much say it all.  As if I could forget any of the days, minutes or seconds that have passed since we got the news, and as you can probably tell from the note, Connor hasn't either.

To say life at our house has changed would be an understatement.  Even though I have lived with Type 1 Diabetes for almost 15 years, Connor's diagnosis at the age of 5 hit us like a physical blow.  Yes, I know there are way worse things in the scary world of childhood illness and yes, we know that it is a completely manageable disease, but it still hurt like a punch in the face.  Even though the symptoms were classic and we could not think of any other reasonable explanation and in my heart I knew what the doctor would say before we even stepped into that exam room, I cannot express to you how desperately Matt and I wanted this to be a fluke thing, a virus, a random infection but not diabetes.  I think it is a innate feeling in parents everywhere to want better for your own children than you had.  I don't talk about my diabetes a lot, in fact as little as possible because it is something I live with every day and I don't ever want to burden anyone else with it or have people feel like they need to feel sorry for me, because they don't.  I just never wanted this life for either of my boys.  Don't get me wrong, I have a great life, but there is never a single day where I don't think about diabetes and it's impact on my life.  No matter how hard I work at it or how easy I make it look, it is still a burden, some days more than others and now my baby is shouldering that same burden but on a much smaller and bonier set of shoulders.  In a way, I feel like Connor got cheated.  I got fifteen years to be a carefree, sometimes stupid kid without a lot of worry in my life.  Connor got five and that doesn't seem like enough.

Connor, in his usual fashion, has really impressed us over the last two weeks.  He has been so incredibly brave and understanding beyond his years.  Four days after his diagnosis he was doing all of his own finger sticks and giving himself his five daily injections, which completely blew our minds.  He came downstairs one morning and announced that he would be giving all his own shots from now on. Why?  "Because I'm a man, Mommy."  As happy as we were for his independent streak to come out, it was another tiny crack in my heart, because he isn't a man, he is a little boy doing grown up things.  After giving both his morning shots in his legs, he looked up at us and said, "I knew it.  It hurts way worse when you and Daddy give them to me."  Ouch.  Literally.

We are slowly getting out of survival mode and moving towards a new normal.  Connor is back at school, a place where he finds immeasurable joy, and most of our days have been happy.  He is becoming pals with the school nurse and he told me yesterday that she is working with him to teach him everything he already knows.  "Mommy, I let her tell me even though I know how to do it all, because it makes her happy to show me."  That's my boy!  We are carefully navigating the sometimes stormy emotional waters of a five year old diabetic and though those sad or mad (or "smad" as my preteen husband has named them)  moments have been blessedly few so far,  they have served as reminders for his dad and I that no matter how mature he is or how ridiculously high his IQ, in that freakishly tall body still beats the heart of a five year old who wants answers and explanations that don't exist.   Man, that hurts.  But the good news is that it hurt a tiny bit less today than yesterday.

So thanks to everyone for all the sweet messages and prayers, we have been more flaky than usual in responding, but we saw and appreciated all of them.  And thanks to our friends that didn't look horrified when we showed up places looking like hobos and spontaneously started crying.  I am proud to say that I only cried in front of 3 out of 4 of my bosses.  That 4th one was a major test in willpower and I made it!
And for those of you that might be worried that this major life change might have squeezed some of the weirdness out of our oldest child, I saved this last story especially for you.   So the last step in insulin injecting that Connor isn't doing by himself is actually putting the insulin in the syringe, but he has been dying to do it.  He walked up before dinner last night and said, "Mommy, I really want to do this all by myself, can I please put the Maxima in the needle?"   I paused, thought for a second and said, "Can you put the what in the needle?"  He stared at me like I had lost my mind and said, "The Maxima. That is what I started calling the insulin.  So can I do it or what? Me and Hector are starving!"  I glanced over at Hector/Hudson and he gave me a dirty look and said, "Where the maxima?  I so hungry!"  Oh that crazy Carlos, why go weird solo when you can drag your brother along for the ride?

Long live the Maxima!
Posted by Unknown at 9:12 PM 0 comments