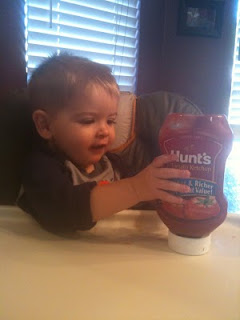 As a new,first time Mom with Connor, I had a lot of big ideas and had a lot of things set in my mind that I was absolutely not going to do. After all, I was so full of knowledge and experienced with raising children. Right. I was one of those people that secretly frowned on other parents in public for "allowing" their children to throw fits or run wild, toddlers using pacifiers and downing happy meals. I was positive that I would do a much better job at handling my child and as Matt likes to say, my number one skills are talking smack with nothing to back it up and believing that I know everything, so I figured I was prepared :)

One of my pre-parenting pet peeves was when kids would refuse to eat anything unless it was drowned in ketchup. I can't exactly say why this bothered me so much but it really did. I made a big stand on this issue and decided the only way to combat it was to allow Connor to never eat ketchup. I figure, if he didn't know what he was missing, it wouldn't be a big deal. Well let me tell you, that little plan worked. To this day, he still doesn't care if he has ketchup and in fact, is not a fan of most condiments or sauces. It got pretty bad for a while though, he started to freak out if he thought he was being served a sauce. I distinctly remember him at two squealing in panic when served green beans, yelling out, "Is that sauce or bean juice? Sauce or Juice??" So I backed off a little after that.

Cut to my second child. I assumed that I would be following the same no ketchup plan with Hudson, since it was obviously so successful with his older brother. It isn't going quite as well. Problem the first, I was able to keep Connor fairly isolated from the temptation of ketchup. However, now that Hud is going to school with Connor and he is the little fish in a big pond, ketchup is available at lunch for any big kid interested. And boy is he interested. He loves it so much that he quickly learned to say the word in order to be clearly understood when he demands it. "Dechup!" I hear this dramatic cry constantly. My one year old is in love with detchup. He has become the child I couldn't stand when I was a childless, self important, know it all. He wants it on everything and not just a little, a lot. He has perfected his dipping hand position and sometimes when he is in his high chair waiting to be served, I will catch him "air dipping" in practice.

It doesn't stop there though, he has decided to refer to all condiments as "detchup." This includes, but is not limited to: syrup, jellies, peanut butter and salad dressing. It has become a one word symbol for all things culinary that he loves. He also likes to lick off all the detchup (jelly, syrup, whatever) and then yell out, "Mo detchup!" When I remind him that he isn't a cave man that turns into, "Mo detchup peas!" Sometimes he doesn't even want it all that much, like in the video with his pancakes (by the way, I don't normally serve ketchup with pancakes, he just wanted it and I thought it was cute.) But he always likes to have it nearby, in case of a detchup emergency.

All in all, I have had to chalk this up as small stuff that I really shouldn't sweat. It drives me kind of crazy and I feel like we are about one bare foot trip to wal-mart away from being "that" family, but the look of pure happiness in his eyes when he sees that bottle of tomatoey deliciousness makes it pretty much worth it, plus he is just adorable when he says, "Detchup!"
Posted by Unknown at 8:44 AM