One year ago today we brought Connor home from the hospital for the second time in his life. In other words we are commemorating one year of diabetes or as someone online called it Connor's "Diaversarry" (P.S. I officially hate this term and will never, ever use it again because it's extreme cheesiness offends me).  I also think that we might have been more scared and worried making that trip home last December with a five year old than with a tiny newborn.  A lot has changed for our family over the last 365 days and we are so proud to have a healthy, happy almost 7 year old...who also happens to have diabetes.

I am so relieved to complete this year because we have officially lived through all the seasons with diabetes.  We now know what to expect at all manner of school party, survived not just one, but two baseball seasons plus a myriad of other candy filled holidays.  We swam with diabetes, ran with diabetes, laughed with diabetes and cried with diabetes. We have run a gamut of emotions not usually seen outside of a Lifetime movie.  Matt and I both feel like we have aged about 7 years in 12 months and he finally found his first gray hair.  We are now at a gray hair ratio of Melissa's 1000 to Matt's 1 but oh, how that one made me so very happy.  I know it's petty but I just tuck the memory of that single gray hair (which I also discovered by the way, increasing my glee ten fold) and pull it out (pun intended) whenever I need a little pick me up!


We have tried to spend the last year working as hard as possible to minimize diabetes' intrusion on Connor's life as much as possible and some days it works...for about ten minutes :)  and that is still our greatest challenge, letting Connor be a six year old boy without having to drag around the burden of diabetes (and by the way that burden often takes the shape of a thirty year old woman he calls Mom). We still have our bad days and can rationally accept that those are just going to be par for the course as we navigate through this together. But man, do they sting. Connor came home from school on Breakfast with Santa day a few weeks back and told me that he didn't think he would ever participate in that again, despite being super excited for days leading up to the big event.  Why the sudden change of heart?  Because his blood sugar was low and so he had to spend 45 minutes in the clinic and by the time he made it to the breakfast with the big man, it was over and he ate a donut alone in the cafeteria with the school nurse.  Is that the end of the world?  No. But in that six year old moment, the hurt was so big it took my breath away.  Those are the moments that I can't fix despite the frantic hover of my stellar helicopter parenting and I hate it, but I also know at day 365 we are leaps and bounds farther than we were on day 1.  When I think back to our emotional state last January, our family is almost unrecognizable today.  Connor spends most of his days laughing and smiling, loves every millisecond he spends in school, considers the school nurse to be one of his closest friends and for the most part is unaffected by the inconvenience of diabetes.  It is so awe inspiring to see God's plan for our family.  If we ever wondered before why we ended up with the most intelligent, mature kid on the planet (and trust me we have often wondered this), now we know.  This is the boy designed to handle this life.  He is so unlike his Mom and Dad in so many ways because this is what he was made for. This realization makes me immeasurably proud of him, but also hurts my heart because I know that his days won't always be easy and there are challenges coming that I won't be able to help him with, but I know he will be ready.

This new life is changing and refining his heart for great things and I can't wait for day 20,426. 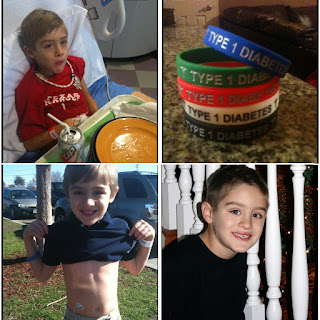