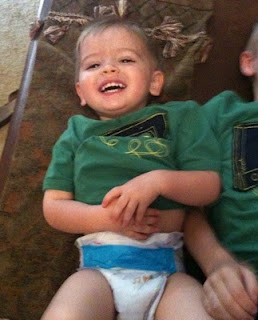 Hudson is waist deep in a very annoying habit right now. Streaking. On more mornings than I can count, I have gone into his room to get him out of the crib and he is completely naked and I am almost 97% sure he didn't go to bed that way.

This habit is frustrating for me because it has gone on for so long. I thought it would be a fast phase that he would quickly pass through, but he has developed a taste for the feel of a breeze on bare skin. The first few times, I really just thought it was a fluke because it wasn't happening with any regularity. I was so naive. It wasn't happening regularly because he wasn't good at it yet! Hudson's bedtime routine is bath, pajamas and then he hits the crib. We shut the door by 7:30 p.m. and we don't see or hear from him again for 11-12 solid hours. I thought this was awesome. But now that I have really started to think about it, I might have been bragging a little to much about his sleeping ability. I am now fairly sure that he only sleeps until 3:00 a.m. and then spends the next three or four hours wrangling himself out of his clothes and diaper.

I have tried several things, including the snap up/zip up one piece pajamas (which he looks adorable in). I have witnessed with my own eyes that tiny little toddler pull those footie pajamas apart at the chest like the Incredible Hulk. I did temporarily stump him with fitted long sleeve shirts. I thought I could beat him by putting him a pajama top so tight that it could double as a tourniquet. It worked for a while, several mornings I came in to discover Hudson naked except for what look like a shrug (shout out to the fashions of 2004). He could get it over his head, he just failed at freeing his arms. He would also be sweating from the effort. There is no one more determined than my one year old,though, when he has decided to get naked. Soon the long sleeve shirts also hit the floor beside his crib. I even tried turning his one piece PJ's backwards. I really stressed about this though because he looked like he was in a blue fleece straight jacket and I was afraid I was damaging him psychologically. He just looked at me with pity, his eyes quietly saying, "Amateur."

Now on to the diaper, Hudson absolutely cannot resist pulling off his diaper. As soon as he is pantless, that diaper is living on borrowed time. His big thing right now is recognizing and throwing away trash. Or "tash" as he so lovingly calls it. That is his favorite thing to do and he is constantly grabbing things like socks or his brother's underwear and racing to the trash can calling out in a self-important voice, "tash, tash, ok guy, tash." He is hugely proud of his ability to throw things away. Since he is a very smart boy and has seen me throw away countless diapers, he now associates all diapers, clean or dirty as trash and it is his life's ambition to get them off his body and to the nearest trash receptacle. My sit down talk with him, in which I tried to explain that diapers cost money and our last name is not Rockefeller didn't have much of an impact, so I am on to plan B. Duct tape. Yes, I realize it is a large leap to go from calm, reasonable chat to duct taping my kid's diaper on, but it is a leap I am willing to take. I actually got the idea indirectly from our babysitter, Katie (sorry Katie). She is a triplet and the boys and I were invited over to her house for their recent birthday (can you imagine triplets? Now that would be a blog). Their mom Janice, one of my good friends from school, was showing off all their adorable baby photos when something caught my eye. In one photo, they all had their diapers held on by duct tape. Hello jackpot! That night I had Matt bring in the duct tape and I reinforced that little Houdini's diaper like nobody's business. I imagine he spent half the night trying to work that bad boy off, but to no avail.

It took a pair of Connor's safety scissors to get him out of it the next morning, but it was one heck of a victory for Mom.
Final score: Mom 01-Kids 1000
I'm totally gaining on them!
Posted by Unknown at 7:12 PM