For the last couple of years I have written a Thanksgiving post about all the blessings in my life, namely the three loves of my life. While I am still thankful for those particular blessings, this year I wanted to dedicate my Thanksgiving post to another child that has taken up a big piece of my heart. A couple of years ago, I decided to submit my name into a pool for home bound teachers in our school district.  When Matt was sick in high school, he had a home bound teacher that really made an impact on him.  We still talk about her to this day and I thought if there was a need, I might be able to help someone in the same way.  After submitting my name, I didn't hear anything back and pretty much forgot about it.  Over a year later, I was contacted by a school to work with a third grader named Chenee.  There are a million things to know about Chenee, the least of which is that she has leukemia. 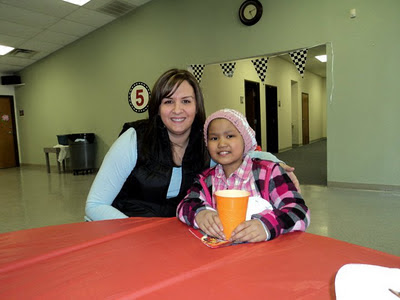 When I first started visiting her at home, I didn't really know what to expect.  I had never been around an eight year old with cancer before, so I was worried that it might be sad or scary.  I was nervous.  But walking into the Cayco home was like walking into a beam of sunlight.  Being around Chenee and her family is like seeing the physical embodiment of joy walking around in human form.  She has a mom and dad, an older brother and a spunky little grandma they call Momma Lola. Her parents work night and day to keep their family afloat and take care of their little girl. I worked with Chenee four days a week until the end of school with the hopes that she would be able to start back with her classmates in August.  In the time that I taught Chenee, we sometimes worked at home, sometimes in the hospital and never once did I see her with less than a mega watt smile on her face.  Even though I knew in my heart she was sick, I knew she was hurting and I knew she was tired, she and her whole family always seemed happy.  They tell me that they know there is a higher plan for Chenee and they have faith and peace in that plan.  In short, they are amazing.

As a bonus to my visits, they always treat me like royalty.  I have never stepped foot in their home or hospital room without being treated to a home cooked meal plus had left overs to take home to my boys. I have been introduced to a variety of Filipino foods and Chenee is a crack shot baker. They are incredibly gracious and humble and are so grateful for the help I give their child that it makes me want to cry every time I think about it.  Frankly, I'm not that great of a teacher :)  Sometimes we just talk.  I have most definitely given her some questionable math instruction over the past couple of years and we are currently starting a science fair project that is already walking a very fine line between genius and disaster.

Chenee did start back to school at the beginning of fourth grade and I never thought I would be so happy to be out of a job.  Unfortunately, she needed me again a few months into the school year.  That is pretty much how our time together has gone since 3rd grade, she goes to school when she is able and when she isn't, she gets me.  She is now a 5th grader and I got the call earlier this month that it was time for me to head back to the Cayco household.  It had been a couple of months since I had seen Chenee in person and when Momma Lola opened the door she exclaimed, "Oh my goodness Melissa, you have gotten so big!"  What a welcome, right?  I had to laugh when Chenee explained that she was pretty sure she meant that I had gotten taller, although I know for a fact I have been this exact height since the 7th grade. Nothing like having your Filipino grandma call you out for weight gain!  Nonetheless, they keep stuffing my fat face with delicious food and I just can't say no.

So, our work continues and even though it sounds cliche, I know that I am learning as much as Chenee, and not just about 5th grade math.  I am learning what grace under pressure looks like.  I am learning about finding joy even though you are facing terrifying odds and I am learning about peace that passes understanding every single afternoon that I sit at her kitchen table.  Chenee can't get better without a bone marrow transplant and right now, a match has not been found.  I have never heard her parents bemoan this fact, they are just resolute in their belief that they only need one person and that person is out there for Chenee.  This week during our last visit before Thanksgiving, I asked what they were going to do for the holiday.  This family is always having a party and I love it.  Chenee thought for a minute and said that they were going to have a special celebration this Thanksgiving because two years ago on Thanksgiving they were in the hospital hearing that their only daughter was being diagnosed with leukemia.  She gave me one of her giant smiles and said, "This Thanksgiving we are celebrating two good years."

So this year, I am thankful for two good years with Chenee and praying for her to have ninety more.

I am including a link to a piece from the local news about Chenee's search for a bone marrow match and encourage you to get on the bone marrow registry.  Share this with anyone you can so we can get the word out about this little girl's fight.  All she needs is one person.
http://www.wfaa.com/home/related/Wanted-Bone-marrow-match-for-10-year-old-Filipino-girl-130564078.html 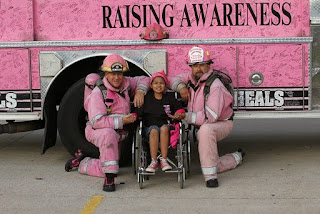 A few weeks ago Connor and I ran in our first 5K. Maybe I should say Connor ran his first 5k, while I merely finished.   Yes, that feels more honest.  When we signed up, I had these lofty dreams of impressing my runner child by completing this run with dignity and my head held high.  Yeah, that didn't happen.  We signed up with the uncles and Ms. Karen (who furthered shamed me by running the 10K).  Earlier in the week, this incident happened. My knee was still shredded and prone to spontaneous bleeding and my training thus far had consisted of absolutely nothing.  I had decided to following the training plan of "Just Wing It", so I was obviously not in peak physical condition.  The scene was set for humiliation, but I was not going to let my oldest son down.

The run started out with a hill. Fantastic.  We had agreed that in the likelihood of my inability to keep up, Uncle Aaron, armed with a black market inhaler from Mexico, would become Connor's running partner. I felt like on a 3.2 mile run, at least one adult needed to keep him in sight in case a random child predator decided to crash the course.  You never know.  I was left behind almost immediately.  I also immediately wanted to quit, because I am pretty much a quitter, especially since my own kid, who I was there to teach a lesson on not quitting, wasn't even going to see if I did it or not!  But I powered on alone.  I kept up a very steady walk with occasional spurts of gentle running.  I made sure I wasn't at the very last of the pack because I have watched Connor at enough of the runs to know how the person at the end of the group is treated.  There is always a lot of yelling and cheering for the person that finishes last.   That seems really sweet and encouraging except when you realize that the people generally finishing last are overcoming some kind of significant physical disability, or are in the 85+ age category, or are 9 months pregnant and trying to induce labor.  They deserve those shouts of encouragement because they have truly accomplished something great often while overcoming tremendous hardships.  I don't think I can consider being an out-of-shape fat chick who is ticked because she forgot her ear buds a disability worthy of having a finish line full of people cheering me on. How embarrassing. 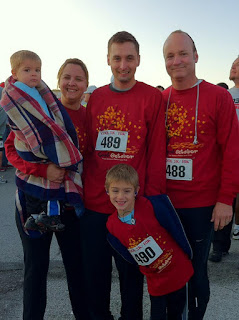 After a while, I started to see people headed back in the opposite direction which meant that they had reached the halfway point and turned around.  That also meant that I would soon be seeing my child for the first time since the run started.  I kicked it into high gear because I didn't want to shame him.  That only lasted for about 72 seconds and then I got tired again.  I should probably point out that my scab had by this time split open and I was bleeding again which furthered added to my good mood.  I also passed by the most interesting garage sale so slowly that I could have typed out an inventory for the homeowner by memory.  If only I had my wallet!   Finally, I saw Aaron and Connor headed my way.  Aaron didn't look great, which cheered me up immensely.  I could tell he had been puffing on the Mexican inhaler.  Connor had his game face on, Ipod in place, running like a champ.....until he saw me.   I wish I had a camera to take a picture of the look of confusion on his face, like he was genuinely surprised that I was not only not right behind him but at least a mile back.  He was shocked and to make sure everyone knew that he was mine and I was his, called out, "Mommy, why are you going so slow?"

I finally reached the turnaround and headed back to the finish line.  At this point, there are now 10K runners passing me, but that didn't even phase me.  I had been running next to this sweet older lady and she said, "Well this is humiliating, I can't believe they have already run twice as far and are passing us."  I told her, "Hey, once my 5 year old lapped me I gave up all semblance of dignity."  I think you could also probably infer our rate of speed by how easy it was to carry on in depth conversation : )

Finally! The finish line!  There was my sweet boy waiting to cheer me on!  I wasn't last after all and I was so relieved.  Of course, he had already been done so long that he had time to eat 2 yogurts, a banana and an apple, but who cares? We did it!  I was so proud of him, he finished 12th in his age group and was by far the youngest runner to place that high.  As for me, well let's just say I did not finish anywhere close to 12th in any age category.  I asked him when it was all said and done if he liked the shorter 1 mile races better or the long ones and he said, "The long ones, Mommy. That was easy peasy."

Ah yes, that was my exact thought as well, minus a few four letter words.
Posted by Unknown at 8:17 AM 0 comments