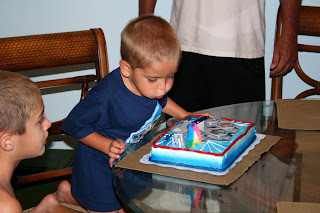 Well our baby is turning 4 and while that in some ways seems shocking to me, I also know that he has lived a whole lot of life in 4 short years and every minute of it has been an adventure.  To celebrate our little Mr.Fat Cheeks, I decided to compile a list of Hudson-isms that really capture his spirit while sometimes simultaneously striking fear into the hearts of his parents.

1. Hold on, I gotta call somebody.
Seeing Hudson talk on his imaginary phone to someone is both adorable and slightly worrisome because nine times out of ten he is talking to Jayden the Red Power Ranger and his calls usually end with him giving Hudson some kind of mission that entails a battle to the imaginary death.  During these battles any one of us could be collateral damage so we find it best to steer clear whenever he is taking a meeting on the phone.

2. They's got tigers in there?
Ah tigers, Hudson's kryptonite.  Whenever we want him to rethink a decision to venture into an unknown place we just casually mention that we heard there might be tigers.  It puts an immediate stop to whatever plan he was concocting.  It might not terminate it indefinitely but it at least slows his roll.  There is visible brainstorming in which he weighs the pros and cons of what seemed like a fun idea versus the chance of running into a tiger, his apparent nemesis.  For example, he and his brother wanted to ride the kiddy haunted house at the state fair.  I did not.  I told Hudson he would probably be scared. He replied, "Why?  They's got tigers in there?"  Yes, yes they do.

3.  I do this myself.
Hudson "do everything" himself, whether he is actually capable or not.  Lack of confidence is not one of Hudson's problems.  Lack of actual skill to back up that confidence is another matter.  Hudson is the best runner, swimmer, dancer and ninja in the whole entire world.  Why in that aforementioned world would he ever need assistance?  There is a certain little swagger that accompanies Hudson Hill.  Emphasis on the little.  He is tiny but that personality enters a room about five minutes before that little body.

4.  I got an idea!
I wish I had a picture of Hudson's face as he says this particular phrase but it is always so fleeting.  There are always raised eyebrows along with a single index finger in the air pointing to what I imagine is a single illuminated light bulb. Hudson gets an idea about 20 times a day and those ideas are most likely dangerous but seem like boatloads of fun.  For example, the day he got an idea to ride the garage door all the way to the top and then dangled like a tiny doll while laughing like a mad man.  Or the day he got an idea to cut his own hair.  Or the day he got that same idea and cut his hair again (see #5 on the list).  Hudson is definitely an idea man and his ideas are generally hilarious.  Well 70% hilarious and 30% heart stopping.

6. Where's my Connor?
Hudson is a fantastic little brother and adores his big brother.  He wants to do everything like Connor, but with an added twist of his own.  He misses his brother when they are watching TV in separate rooms and over the last six months has shown so much compassion towards Connor.  Connor only has to mention that he doesn't feel good and Hudson will race over to grab his diabetes bag.  He pretends to wear Connor's pump (which he firmly believes connects to his belly button) and always uses a really low voice when emulating his big brother. "Look mom, I'm Connor.  I so big and I gots all my medicines." Hud is our comic relief and we can't imagine not having him around to booty dance for us when Connor has a sad day.

7.  I'll be right back.
This particular Hudsonism could mean that he is simply headed back to the toy box, or it could mean that he is headed to Neverland.  To be honest, it's usually Neverland (Peter Pan's Neverland, not Michael Jackson's).  Hudson spends a large part of his day in another world.  He doesn't think that he's a hero because there is no thinking about it. He IS Peter Pan or Spiderman or Captain America or anyone else who seems ready to save the day.  He is constantly on the look out for bad guys or damsels in distress, preferably both.  He has this fantasy of fighting a bad guy in order to "gets myself a girl," who he will then "kiss with my mustache." Not his lips just his mustache.  That is going to be one lucky lady.

8.  I need my soups!
This particular saying ties in with #7.  Hudson is never fully dressed for the day without a costume or suit  (or as he says it, soup).  These suits can be real or imaginary, he isn't picky.  Currently in my car, I am carrying both a pirate and peter pan hat, tall boots, three swords and an astronaut suit.  We are a couple of clowns and an elephant short of a traveling circus  These suits make Hud feel awesome and out of all the memories I have of my boys being weird, one I desperately hope I can still remember at age 80 will be Hudson putting on his imaginary suits, armpit length gloves included.  Another would have to be when as part of a consequence, I required Hudson to take off his imaginary suit while he was in time out.  Hilarious and effective.

9. That's my favwite!
Here's the thing with Hud, everything is his favorite.  Everything.  This particular saying can apply to anything from the salad bar at Cici's to a t-shirt he has known all of 2 seconds.  I love this enthusiasm.  He feels exuberant joy over the most mundane things and I think that is wonderful.  I don't get it, but I think it's wonderful.  It's hard for me to imagine walking around the world and at every new/old/cool/weird thing I see proclaiming, "That's my favorite!"  If you ask Hudson what his favorite color is he will say, "Red. Blue. Red. Yellow. All of them!" and then laugh hysterically.

10. Close your eyes, Mom!
My favorite of all Hudson sayings because I know that whatever situation I open my eyes to, it will always include a sweet little boy wearing a giant smile. 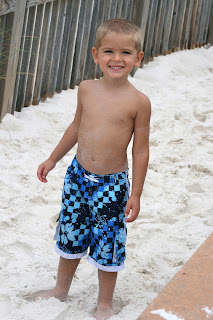 Happy Birthday Hudson!
Posted by Unknown at 10:38 AM 0 comments