She ain't heavy, she's my cousin 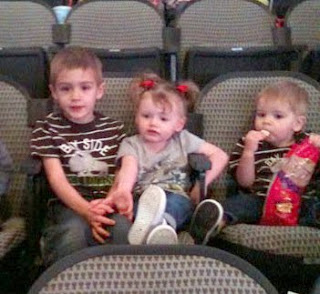 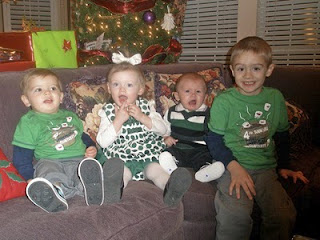 When my brothers and I were growing up we spent a lot of time, especially in the summer, with our cousins. Even though they were not always our most geographically close friends, we had some of our best times with them and still do as adults. So when Connor was two and a half and I was pregnant with Hudson, we were excited to find out that the boys would be getting a cousin of their very own. This was a big deal to me, because I wanted my boys to have the same connection to family that I did and for a while I was a little worried that they were going to spend a big chunk of their childhood cousin-less.
So, just 10 weeks before Hudson arrived we had a little girl make her grand entrance into our family. I was so excited that they would be so close in age and I just knew that they were going to be the best of pals. Once Marlee arrived, someone was immediately smitten and that someone was Connor Zeke Hill. He was already in high anticipation mode for his own baby and he was giddy with excitement about Miss Marlee Van. He immediately decreed that she was his sister. He knew that he was getting a brother and this is the closest we had ever come to a baby girl, so that was the conclusion he came to and for quite a while there was no convincing him otherwise. He just loved on her and she was great practice for him to get ready for Hud's arrival. But I still just knew that once Marlee and Hudson were toddlers, they would gravitate to one another because of their ages and placement as the babies of the family. Well, that hasn't exactly happened.
Marlee and Connor are best buds. She is absolutely crazy about him and he is just as in love with her. Guess who is the odd man out? It was pretty clear early on that Connor and Marlee have very compatible personalities, despite their age difference. Marlee is very smart and can really keep up with her big cousin. She was an early talker and has a great vocabulary that is easy to understand. Hud, while also very smart, talks like a little caveman. As the baby of the family, he has no real need to talk, Connor does it for him. "Mommy, Mushy would like a sandwich." or "Mushy feels like he needs two hugs and a diaper." It became pretty obvious that Hudson's role in this trio would be as lookout to cover for whatever schemes Marlee and Connor come up with. I think he is okay with this as we often refer to Hudson as a "party of one." He is always pretty happy and can find plenty of trouble on his own.
Marlee is hilarious. She is such a smart, sassy little thing. I love that she is a total girly girl despite Cullin's efforts to butch her up. She loves to have her hair up in rollers and several times I have seen her fake shaving her legs in the bathtub. She is obviously way more mature than Mushy :)
I am not too worried about Hud though, he has another cousin to try and win over, Marlee's little brother Blu. Now every baby we see, Hudson calls, "My Bu?" in a really sweet and hopeful voice. I am keeping hope alive that Blu won't be totally turned off by Hudson's sweet habit of over loving and accidental squishing. I am determined to find that kid a blood relative best friend! I am just going to put it out there that if I can't convince my niece or nephew to be Hudson's friend, someone is going to have to pop out another candidate and it's not going to be me.
I'm just sayin'.
Posted by Unknown at 10:28 PM