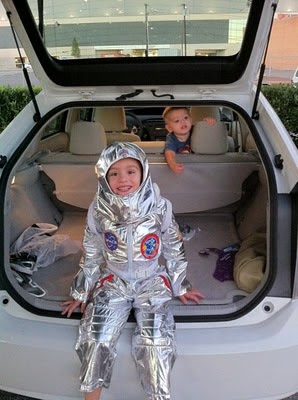 This morning as Connor finished up some self-assigned homework, he told me that he didn't want to go to his big school today, he wanted to go to his baby school. That has never happened before so I sat down to figure out what was going on. Connor loves school, every minute of it and I was really nervous that something terrible had happened.
Something terrible had happened. A boy hurt his feelings. A classmate (who shall remain nameless, but whose name is forever imprinted in my mind) told Connor that his shirt was stupid. Okay, that was pretty mean. But here's the kicker. It was Connor's space shirt. Cue the Law and Order sound effect....Dun dun. You probably know by now that space is Connor's most favorite thing in the world. His little nerd heart yearns for space knowledge and he gets real joy in wearing his obsession in shirt form. This was a pretty big blow. I'll just admit here, because I really do try to show the good, the bad and the ugly on this blog, that my gut reaction was to ask, "Well, what in the crap was he wearing?" But I restrained myself. I am twenty-eight after all, not four. It was hard though. I can be quite petty.
I knew everything I needed to say to make him feel better and I knew everything I needed to say to help him understand that this was a minor blip on the radar of childhood. After all, I do navigate the hurt feelings of twenty-eight fifth graders every day, but this was different. This was my kid. So although my heart was aflame with a burning sense of injustice, I switched to Mom mode. I told Connor there was a good chance that the kid was just having a bad day (or he is just a jerk) and it was a good opportunity to remember how much it hurts when people say mean things to you, so he should try and not make other people feel like that. You know, all the stuff that June Cleaver would have said to the Beav. He cheered up and agreed to head to school and face his shirt nemesis and I in turn, went to work and worried about the situation all day. I just can't help myself!
At lunch, during our daily phone therapy session, Matt pointed out what should have been obvious. It wasn't just that Connor's feelings were hurt, but my feelings were kind of hurt too. And not just because I try so hard to send him to school in a nice, constantly rotating wardrobe that spaces out the astronaut shirts at reasonable intervals so he will never be branded as the kid who wears the same clothes all the time (Yes, teachers notice that stuff!). My feelings were hurt because this was the first time in "big" school that someone didn't think my kid is as awesome as his daddy and I do. I know that a super tall, skinny boy that constantly talks about space and strolled into show and tell wearing an astronaut costume that makes him look a lot like a baked potato is a little odd, but if his dad and I can embrace the weirdness, I think the rest of the world should too. Is that really too much to ask?
Baked potatoes need love too.
Posted by Unknown at 7:59 PM