The greatest place on Earth.... 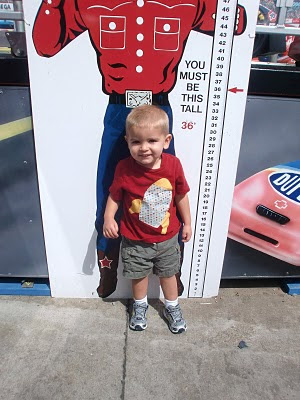 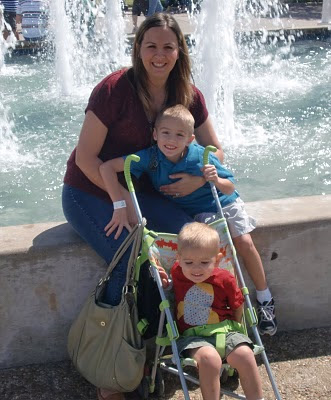 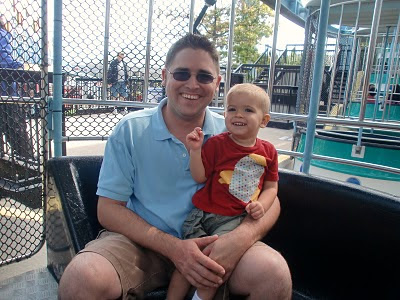 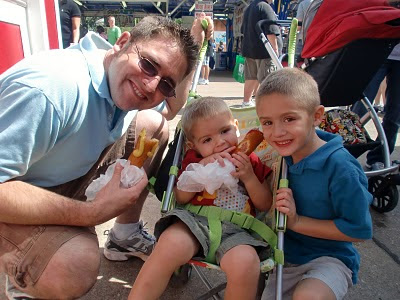 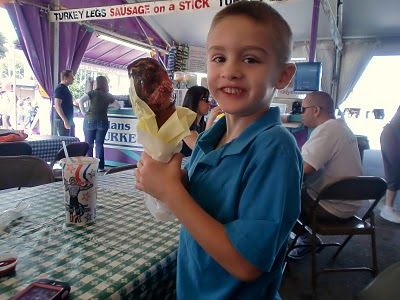 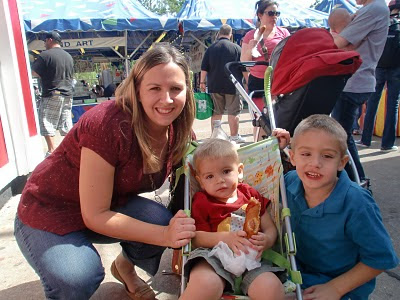 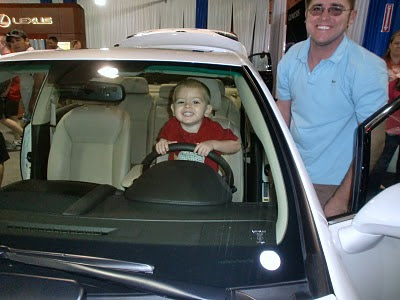 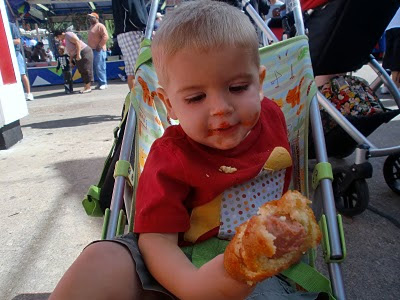 Yesterday Matt and I took the boys on our annual trip to the State Fair of Texas. This is probably our most favorite place to go and we never miss a year. We absolutely love sharing the fair with our boys and this was really Hudson's first year to experience things as a big boy.

This was also our first year to take them alone, just the four of us. We were a little nervous about braving it without four extra grandparent hands because one of our children tends to be a loose cannon, but in the end it was wonderful and we were glad we got to have that family experience. We headed out right after Sunday school hoping to get a head start on the crowds and Connor was so excited he could hardly sit still. He had been saying for days how he wanted to ride the big Ferris wheel more than anything else. I am not a fan of the Ferris wheel and I don't think I have been on that giant thing in at least ten years. So I was secretly hoping that he would forget about it once he got knee deep in the rest of the carnie fun. But, back to that in a minute. First things first, we had to get our eating schedule in place. Matt and I are kind of fair food purists, we don't really try a lot of the novelty items. We know what we like and we don't want to chance our fair experience being ruined by a gross, random fried item. Plus, a few years back Matt had a traumatic experience with a chocolate covered banana that he swears on my life he heard called a monkey tail on the news, but when he called it that at a fair booth, the lady pretty much accused him of being a racist. So after that, we decided to stick to our long time faves and they are as follows: Turkey leg, sausage on a stick, Fletcher's corn dog, Texas shaped chip nachos, cinnamon roll, and caramel apples. We never vary from these things, although the order in which we consume them can change, we always start with the Fletcher's and end with the caramel apple. It is heaven. This year Matt had to have the all important talk with Connor about the difference between Fletcher's corn dogs and the rest. It went something like this, "Connor, we are a Fletcher's family and the rest are junk. We never eat the junk corn dogs." Who knew such profound life wisdom could be dispensed at the fairgrounds surrounded by mullets and motorized carts.

As we waited for Matt to deliver our Fletcher's corn dogs, Hudson made his first magical discovery of the day. Ketchup at the fair is dispensed in enormous 10 gallon pump containers. He thought he had died and gone to heaven. I was staking out a table and turned to see that Connor had pushed the stroller directly underneath the condiments stand and was trying to pump ketchup directly into Hudson's mouth. I had to put a stop to that, although he had everyone in the surrounding crowd laughing. As I dragged Hudson away screaming from the ketchup watering hole, Matt showed up with our first course and plenty of cups of ketchup for the little man. He was content to sit with us, downing shots of ketchup chased by the occasional bite of corn dog. It was all disgusting and adorable at the same time. We realized that Hudson was going to be a cheap date, the ketchup is free at the fair :)

Next, we went to what we affectionately call the meat tent so Matt could get his turkey leg and sausage on a stick and of course, more ketchup for Hudson. After that we went to the auto show. Now, we knew this would be a highlight of the day. Hudson and Connor sat in more cars and truck than we could count and loved every second of it. Apparently my children are big fans of the tacky bright yellow sports car...... a car color, by the way, that I think should be illegal since it seems so desperate. After we left the car show we went to check out Big Tex. It was so sweet, as soon as Hudson saw the giant cowboy, he started yelling out, "My daddy! My daddy!"
All this time, we had avoided mentioning the dreaded Ferris wheel, but of course, Connor had not forgotten. We decided to bite the bullet and got into a gigantic line to wait. We finally got to the front of the line and climbed into our cage. Matt and I looked at each other with mutual glances of terror. That stupid Ferris wheel is so high! Matt had Hudson and I had Connor and they were loving it, but their parents, the biggest weenies in the world were petrified. Take the height and add in the considerable wind that was swaying our cage back and forth and I was transformed into a ball of tension. Connor said, "This is awesome! But Mommy, you are squeezing me so hard, I can't breathe!" I tried to focus on anything but the ground and after the first go 'round, I started to feel better. Better that is, until Hudson decided to start screaming out, "I jump! Mommy, I jump!" and laughing like a maniac. I can't handle that. Once we were back on solid ground, I realized how pathetic it is that both of my sons apparently got all the daredevil genes while their parents are left trembling and nauseated after riding a Ferris wheel that has been in existence for more decades than I have been alive. Leaving our dignity at the Big Star, we headed to the Midway.
This was a low point for Hudson, when it was discovered that he is tall enough to ride exactly zero rides. Zero. That poor tiny child has a taste for the fast life and was forced to watch brother careen around tracks while softly questioning, "My turn? My turn?" We kept thinking we would just sneak him on one, but we were shocked to find how diligent those people were about height enforcement. But Matt decided to do a little scouting and finally found a ride where the ticket taker looked to be about 30 minutes past his scheduled break time and probably wouldn't have cared if I had tossed a newborn into that race car. I got him all tucked in next to his brother and they were off! That crappy little ride was the most fun they have ever had together. Every time they swung around the track they looked deliriously happy. It was totally worth breaking the fair rules. When it came to an end all the kids hopped out and headed to the exit. All except one. Finally the man came over to the little red car, obviously thinking that the tiny blond boy wasn't able to get himself out of the car and was met with an obstinate glare and a fierce, "No! Again!" When you don't even reach Big Tex's belt buckle on the measurement sign, you certainly aren't mature enough to manage a graceful exit when your turn is up. After some sobbing and screaming we decided it was probably time to head home. There is only so much fun to be had and so much ketchup to be eaten in one day.
So, that was a really long winded way to say that the Hill family loves the State Fair of Texas. Every last one of us. In fact, Matt says that when he dies, he would like to be buried there so he'll know for sure that I will visit at least once a year. Please. That sounds a little insulting to me. If he was buried there, I would at least come twice. I really do love the fair after all :)
Posted by Unknown at 2:10 PM