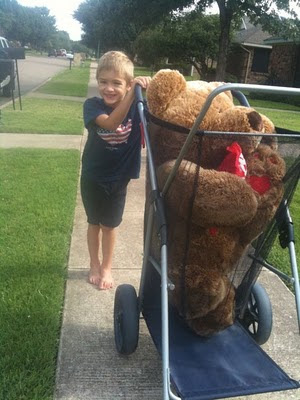 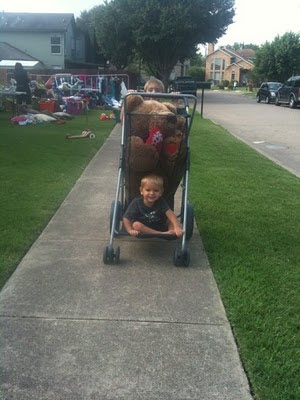 This past weekend we decided to have a garage sale. It was kind of impulsive even though we have been saying for years that we should have one. We just never got around to it. As a result, we have accumulated almost 6 years of junk that absolutely had to go.
Matt and I went through our house and were absolutely ruthless. We ended up with a living room packed with clothes, toys and other miscellaneous junk and the the promise to each other that no matter what, none of it was coming back into our house at the end of the two day bazaar. I let go of everything big and small that had to do with a baby, bassinet, high chair and more. I read once that getting rid of all your baby stuff is pretty much a guarantee that you will become pregnant again, but luckily I don't believe in stupid superstitions so I was willing to tempt the fates : )
The one thing that we didn't take into consideration when doing this massive overhaul of our belongings were our children and their unexpected attachments to toys that have not seen or laid hands on in at least four years in some cases. We have a serious toy problem at our house, thanks to a group of very loving grandparents there is approximately a 1250:1 ratio of toy to boy in our house. I didn't even touch current toys in our playroom but I did put almost everything we had been storing in our garage in the sale pile and that brings me to the story of the giant bear.
Giant Bear has been living in our garage since Connor's first birthday. He has never once even stepped a paw into our house. Thanks to whatever well meaning family member gave him to Connor way back when, but in all honesty we are just not giant bear people. Connor did not even register his existence on his radar until the first morning of the garage sale and then it was like Sally Field clinging to her child in an Islamic country in the movie, Not Without My Daughter. Connor had never loved anything more in his life and was determined to defend it against extradition from our home. He, although never even caring a bit about this bear before, became instantly enamoured and refused to let me sell it. He sat outside in the yard with it, talking to it and telling it how wonderful it was. He packed it up in a Canton cart (also for sale) and took it for walks up and down the sidewalk. It was absurd and that was only his behavior when there were no prospective buyers around. As soon as anyone, man, woman or child showed interest in Giant Bear he threw his body on top of it and clung to it making fake crying noises. Guess who looked like the nicest mommy in the neighborhood? I stood strong though, I told him there was no way that bear was staying with us. He reluctantly left him outside at dusk with whispered promises of a new escape plan and then ran to his room to draw pictures of Giant Bear until dinner. Geez.
I told Matt that I was starting to pray that someone would just steal the stupid thing overnight while he slept peacefully with an illustrated bear picture under his pillow. But of course, when Matt and I headed out at dawn to set up for day two of wheeling and dealing what greeted us, all glisten-y with morning dew? Giant Bear. Now, some of you (like my mother) might be thinking that I should have just let him keep the huge bear despite the fact that I know in my heart that we are not giant bear people. But I had to stand firm on my principles. So I did what any other desperate mother would do in my situation. I paid a neighbor kid $1 to take it while Connor was still asleep and then told him that Giant Bear took off in the night in search of his Giant Bear Family. He was lonely for his own kind after all. Connor's a compassionate kid and I knew he wouldn't want to deny Giant Bear the love of his own family.
So, my evil plan worked, we are now giant bear-less and Connor feels like we contributed to the greater good by setting him free. But so help me, if I see that bear out and about in the neighborhood, heads will roll and I am for sure getting my dumb dollar back.
Posted by Unknown at 2:30 PM