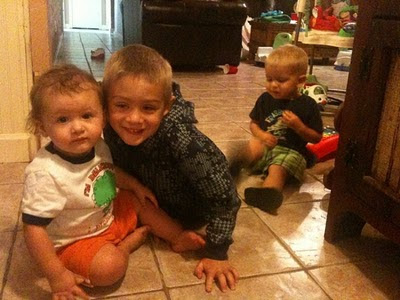 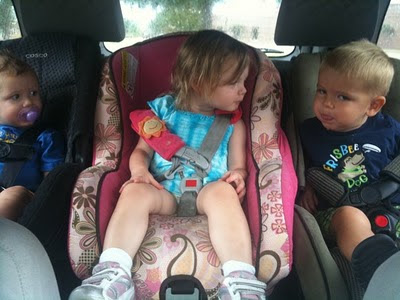 Last Friday I babysat for my niece and nephew for THE WHOLE DAY! Plus I still had my two kids so this was a huge undertaking for me. As most of you probably know that I sometimes have to hold tight to the tenuous strands of control that keep me tethered to sanity and adding in another one and two year old into the mix was probably asking for trouble. Let me just be clear that none of these children were badly behaved, it was just the sheer number of movers and shakers to keep up with and I am more than a little rusty as a babysitter.
My sweet, artistic younger brother has very little concept of time (love you Cullin) and apparently has an unreliable clock because my day was supposed to last from 10-3 and it actually started at 9. Okay, that's fine. He dropped the kids off looking like absolute orphans. Their mommy obviously leaves before he gets them ready because she was shocked when I sent her pictures at work of their appearance (yes, of course I did and put them on facebook). What can I say, even as an adult, I like to give my little brother a hard time. So, he brings in these two little ragamuffins and pretty much says good luck. He forgot a couple of minor things like diapers. So everyone that day got to wear Hudson's giant pull ups no matter what size tush they had. So, Cullin leaves us alone to face the day and after Marlee ended her super dramatic goodbye crying we all settled in to play. You would think that four cousins so close in age would be able to play together. Not really. Marlee and Connor took off on some grand adventure and that left me with Hudson and Blu. After about 30 minutes of a little game I like to call "Hudson Hill, sneaky people rider) Blu decided he had had enough. Hudson has this horrible habit of waiting until Blu (or any other person, animal or thing) is peacefully crawling around on the floor minding his own business, then all of a sudden he will run from across the room and mount him yelling, "GO GO GO GO!" as loud as he can while his victim face plants in a panic because there is a tiny boy trying to go 8 seconds on his back. It is both tragic and hilarious. Blu is obviously his number one target because he has been the only crawler. However, little Bluie had an ace up his sleeve in the form of walking. He had just taken off that week with some really solid step taking, his skills vastly improved quickly that day when he realized walking was the best way to avoid being ridden.
It was so cute to watch Blu walking all over the house with those new, unsteady baby steps. He even got up to what I would call a half run when Hudson chased him with the shopping cart. Ahhh, cousin-ly love. Back now to Connor and Marlee, tweedle-de and tweedle-diva. They had a grand time on some imaginary adventure and Marlee got to have a medical appointment with Dr. Dramatic. He examined her with the "telescope" and pronounced her to be in "okay, but maybe really bad" health. Her prescription? Smores, eaten in a tent. So that's what they got. After all, who am I to disagree with a medical professional. The bottom line is that those two are completely nuts and I am glad they have each other because there is a big chance they will be each others only friends someday. It was really sweet to hear their little giggles coming from inside the tent in Connor's room. I overheard a lot of silliness but I shouldn't have been surprised when I heard Connor say, "Marlee don't you wish this tent was pink? I do, I want to paint my room pink sometime." Marlee's response? " Okay Conna, I paint pink with you." Good Lord! A pink room is never going to happen, but can you see why he loves her so much?
I had just gotten everyone settled down for a nap and the house was so quiet and peaceful when we had a surprise guest....my Memommy! She had heard through the grapevine (my mother) that I had all the kids and wanted to help. That sent everyone (except Hudson who cannot be deterred from a nap) into an uproar and we had an afternoon of chaos. Fun, but definite mayhem. But it was almost 3, so I knew their daddy would be arriving any minute. Any minute now. Any minute..... He was late of course, not that late but late enough for me to give him a hard time.
I love my little Marlee and Blu and I love my two boys, but my goodness how do people with four kids do it every day? Maybe they space them out so they only have one every ten years. It was more than I could handle on a regular basis. I think we will just be sticking with our two little whirling dervishes of destruction for the time being, in fact I am thinking of making Matt sleep on the couch, just to be on the safe side!
Posted by Unknown at 7:37 AM