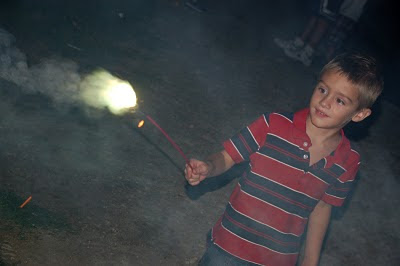 Connor with the magical fire stick 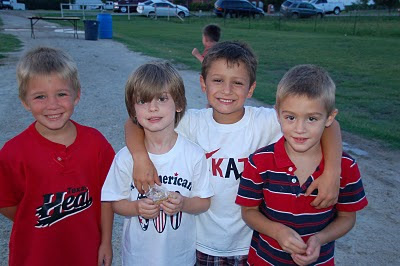 Connor and his buddies 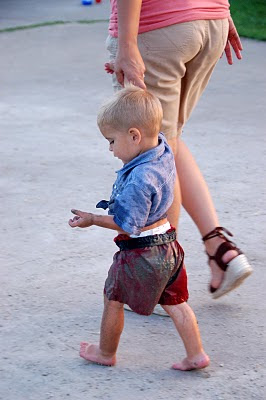 These shorts are certainly witness to a good time. 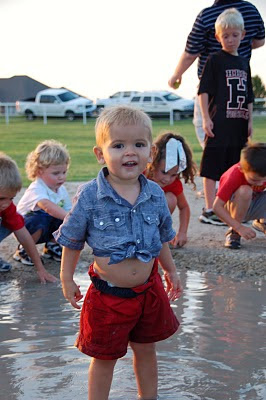 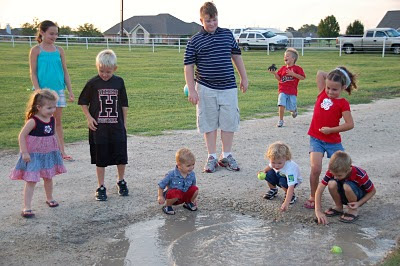 Modeling the Daisy Duke look and his fanclub 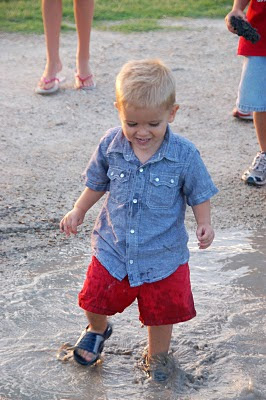 Getting his feet wet 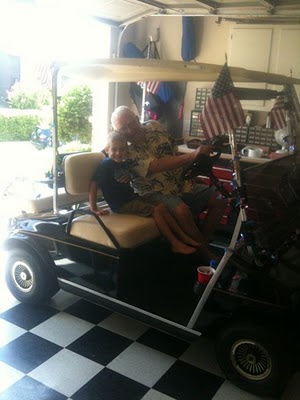 We had a great fourth of July weekend, our best ever. Matt took some time off of work so we had a really long weekend to hang out with some great friends and we loved it. No one had more fun than my two kids and it really cracked us up.
On the actual fourth, we had lunch with my grandparents and then my Memommy said that Matt, Hud and I could take a nap (hallelujah!) while she and Connor decorated their golf cart with flags, streamers and other patriotic decor. Well this, of course, was right up Connor's alley.He and Memommy are two peas in a pod, the sparklier the better. He had a grand time tricking out the golf cart and then we all tooled around the neighborhood showing off the red white and blue.
Later that night we went out to a friend's house in Royce City to have ice cream and fireworks. It became pretty obvious that my kids don't venture out into the country very often because they pretty much lost their minds. Especially Hudson. Being the country, after several days of rainfall, there were huge mud puddles everywhere in the gravel drive and Hudson was drawn to them like a moth to a flame. He kept venturing closer and closer on the premise of plucking a ball (that he had "accidentally" thrown) out of the water. You could tell from the look on his face that he knew he shouldn't be wading in, but he just couldn't resist. Before we knew it he was calf deep in a cool luxurious bath of muddy water and having the time of his life. It was so shocking that all the other kids gathered around in a circle and started cheering him on. Once he had an audience there was no going back. He splashed and laughed, clapping for himself and cheering (self esteem is not something my children lack). We had one extra pair of shorts in his bag, so I thought if I could only minimize the damage to his shirt we would be okay for the rest of the evening (keep in mind we had been at this party less than 20 minutes, it wasn't even dark yet!) So I came up with the idea to tie his shirt up, which only resulted in him looking like a tiny, muddy Daisy Duke. Matt was not pleased. Finally, being the responsible parents that we are, we had to call an end to the puddle swimming. We are now going to be infamous at our church as the only family that had to strip one of their kids naked and hose him down with the water hose at the annual Fourth of July fireworks party. You know, we like to always roll classy.
Once he was relatively clean (and shirtless) he just ran around in circles, overtired and showing off his golden tan. He reminded me of the Situation from Jersey Shore, always shirtless and tanned within an inch of his life. In fact, I know refer to Hudson as the Situation in my mind. That baby can get out of a t-shirt faster than you can blink. My friend Wendy was nice enough to capture some of his misadventure moments and send me the awesome photos (thanks Wendy!). I have to say even as a muddy mess he is pretty adorable : )
Finally it was time to start the fireworks. Apparently Matt and I never let our kids have any real fun because we had one son that thought it was the highlight of his life to splash in a mud puddle and the other that had no idea that "regular people" could do their own fireworks. Yes they are a sheltered team of two. Connor thought only firemen in really far off places set off fireworks, high in the sky for our viewing pleasure. He about freaked out when someone asked if he wanted to set off fireworks. He frantically ran over to me and begged, " Mommy, can I please have another stick with fire on the end of it? Please!!" Um sure, son, but here in America we call those sparklers.
It ended up being that latest that Hudson has stayed up probably in his whole entire life and he loved every single insane second of it. Connor now has a jones for fireworks that I don't think can wait 12 months to be quenched.
So, Happy Birthday America. I can't say for sure if Thomas Jefferson and the other architects of the constitution had solo toddler mud wrestling and four year olds dangerously close to setting themselves on fire in mind when they drafted and signed that historic document all those years ago, but thanks to them for giving us the freedom celebrate it our way. I think they could appreciate that :)
Posted by Unknown at 8:32 AM