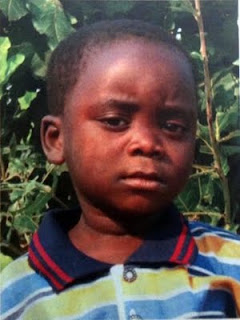 This month is a great time to focus on what we are thankful for in our lives. Our blessings are so abundant sometimes it is hard to believe. I have to admit though that I can easily fall into the trap of focusing on what we don't have or what isn't quite the way I would like it to be. It is easy to get caught up in the material world and lose sight of the things that truly matter. I realize that between Matt and I, all the grandparents, great grandparents, aunts, and uncles, that there is probably nothing in this world that our boys will want for. They will probably never have to experience true hardship and that is a wonderful thing but it also had me a little worried. I don't want to have children who are so self focused that they don' t realize the hurt and pain of others in the world. So enter into the Hill Family our newest member: Nilo.
We decided to sponsor Nilo in the hope that we could be showing and teaching our boys compassion and empathy through our example. I selected Nilo in particular because not only is he adorable but he is the same age as Connor and I thought that would make him easier to relate to. We decided to talk about him a little before we formally "introduced" his photo. Needless to say, Connor was very excited about this little boy.
I tried to explain where Africa is in relation to where we live and how it is very far away. After listening to my big speel about geography Connor said, "So it's like Garland right?" Um, not quite. We talked about how Nilo's village is different than our city and how they live in a different way than us because they don't have things like running water or television. Connor was fascinated by this discussion, especially the part where Nilo likes to kick a soccer ball around the village, just like Connor.
Finally, Matt and I unveiled Nilo's photo. Connor's first reaction."Why is he black?" I was horrified! I couldn't believe that I had raised a tiny racist! Connor has African American friends so I brought them up and he said, "No Mommy, they are brown." That's when I realized that we just had some color confusion, however I was determined to "fix" this problem. I then, in typical Melissa fashion, overthought, worried, and researched the issue. I got a couple of books that explained to kids why we are all different colors. They were great and I personally learned a lot from them. After our learning time though, I had Connor so confused that he came to the conclusion that he and his brother were from different racial backgrounds. Great. I am sure he shared at Sunday school that although he was "cweam colored" his brother was "light brown". We just decided to drop the topic and move on to the compassion and empathy.
We love having Nilo in our family's life. We pray for him every night and there is rarely a time when Connor kicks the soccer ball around that he doesn't wonder if Nilo is doing the same thing. He likes to imagine what Nilo's life is like and if they like to do the same kind of three year old things. I think it is so important for Connor to know that there are so many people in the world that are less fortunate than us and I think slowly, but surely he is catching on. It is hard for him to fathom that Nilo doesn't have a McDonalds or "Chunky Cheese" but he is starting to get it and I hope it makes him grateful for all we have. Sometimes his imagination gets away from him, as it is prone to do, and currently he is hoping that Nilo has a pet lion cub and sometimes gets to ride a zebra if he can get his hands on one. As I said we are still three.
I hope Nilo is a part of our lives for a long time to come. He is a blessing that we were not expecting but one that we now greatly value. Matt says he likes to imagine our letter and picture arriving in Mozambique and Nilo opening that package and exclaiming, "Why are they white?"
We like to think a three year old is still a three year old no matter where you live.
Posted by Unknown at 8:05 PM