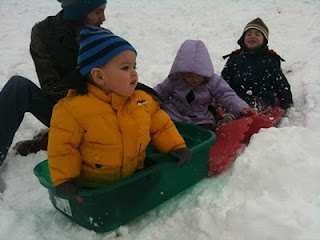 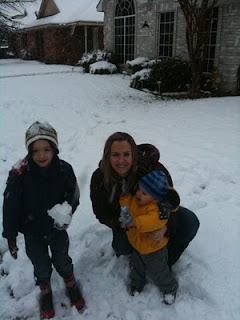 Thursday it snowed for almost 24 hours straight. It was awesome! We ended up with over 12 inches of snow. In Rowlett, Texas. In February. Not only had our boys never seen this kind of snow but outside of ski trips, neither had their parents. Friday was a snow day and Matt and I were really excited to experience this novelty with our boys. We woke up to a literal winter wonderland, everything was beautiful, so peaceful and still. Peaceful and still, at least, until our kids woke up :)
We first ventured out into our front yard and Connor announced he had never seen anything so beautiful in his life. Now, you would think that since he makes this particular proclamation at least three times a week, it's sincerity would wane, but it doesn't. His heart is truly that full of joy and it always makes me want to cry. He frolicked through our snow, shouting for Hudson to follow him. Well that was a problem. When you have twelve inches of snow and a twenty-four inch tall little nugget of a boy, traipsing through snow isn't exactly easy. Once we planted Hudson in the snow, he was pretty much stuck. He gave a valiant effort though, he would climb out of his hole, take two steps and be buried crotch deep again. After a little while, in true Hudson fashion, he just decided it would be easier to just lay down in it, so he did. Connor then announced, "Mommy! Hudson is relaxing in the snow, how wonderful!"
Later on after a phone call from my younger brother, we decided to get together for a little sledding. After all, when will the next time come in Dallas when enough snow dumps on us for sledding? So we decided to visit this giant hill behind my school, apparently along with the rest of the city. Good sledding hills are apparently hard to come by. Now, keep in mind that we are not the kind of people that would own our own winter sport gear, if we go skiing we rent. So our equipment for sledding consisted of several rubbermaid box lids and a shallow plastic box that I thought would keep Hudson safe as we sent him careening down the hill. Obviously we put a lot of thought into this. I really thought we wouldn't stand out though because, again, it isn't like we see a lot of snow around here so I expected to see a lot of make shift sleds. Not so much. We got to the hill and it was like a preview of the Vancouver games, professional looking sleds and toboggans as far as the eye could see. Matt and I were shocked, where did all this stuff come from? The last time we checked our local walmart was stocking pool floats and water wings, but whatever, we were obviously going to be the white trashiest people on the hill and that was fine.
So we started out with our ghetto lids and little box and it wasn't working all that well. The snow was so fluffy we weren't getting a good slide going. Matt was really working up a sweat pulling the boys down the slope. It was a good thing he was dressed so appropriately. (please note the sarcasm). My husband decided his favorite sweat pants would be the best attire for sledding so after about thirty seconds his "snow pants" were soaking wet and weighed approximately 42 pounds. So now we were the hillbilly family trying to sled on box lids with a dad whose pants were determined to end up around his ankles. I know what you're thinking and you're right, totally classy.
Thank goodness my brother arrived with his family to save the day. They brought their own ghetto equipment that turned out to be sledding gold, my niece Marlee's nap mat from mother's day out. Jackpot! Matt (in his lead sweatpants) and Leesa (who is actually from a state that gets snow regularly) got us a nice smooth run flattened out and the real fun began. Connor had the time of his life sledding down on that mat. He and his cousin Marlee are two peas in a pod and she got on behind him and they took off. Hudson pretty much just stayed planted in the snow, although he did take one memorable ride with his dad and was pretty much done after that. He was much more content to snack on as much snow as possible while pretending to not know us.
I am sure in our family's future we will vacation in a place where there is abundant snow and we will hopefully have proper attire and fancy equipment and those memories will be great.
But this one day, which by many accounts seemed a total ragtag mess, was absolute magic.
Posted by Unknown at 7:27 PM