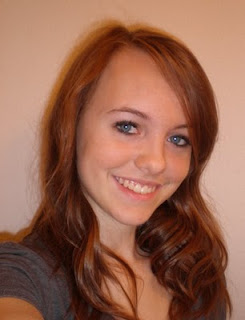 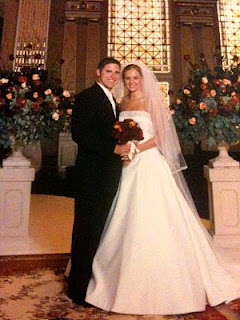 One of Connor's favorite things to do right now is to study the wedding picture we have hanging on our stairs. (I took a picture of the picture with my phone so you could get a visual image :)
It is always covered in fingerprints and he has an endless stream of commentary. "Mommy, I have never seen such a beautiful, giant dress!" or "Where did Daddy get his black clothes, when can I have black clothes like that?" The church was gorgeous, the flowers made him gasp etc, etc. He just loves it. Shockingly he has yet to comment that Matt and I were both much skinnier. I can't believe that has escaped his notice.
So anyway, Connor recently announced that he would be getting "mawwied." He told me that he was going to marry our babysitter, Katie, who just so happens to be 16 years old. We love Katie, she is awesome and Connor and Hud are crazy about her. In fact, Connor often has her at the top of his list of best friends. He practically pushes us out the door when she comes to our house and begs not to leave when he goes to hers. So I guess I wasn't that surprised when he named her as his future wife. He was practically giddy with excitement when he told me she was going to wear a beautiful white dress and he was going to wear his very own black clothes and Hudson could come as long as he didn't mess up the flowers.
I thought this was so cute, so of course I started telling Matt as soon as he got home. Connor overheard and got quite upset. He said, "Mommy! Don't tell anyone I'm getting mawwied, it isn't until I'm really big, when I turn 6!" Matt, Mr. Practical, decides to break the news that even at age 6, Katie was still going to be way too old for him to marry. I started rolling my eyes as soon as the words came out of his mouth because I knew what was coming. Connor immediately launched into what I like to call, The Connor Hill Theory on Aging. He has developed this very detailed theory that basically states that if he knows and really likes someone who happens to be older than him, it doesn't matter because through some kind of magic or space time continuum, he will continue to grow older and they will not until he has caught up to and then surpassed them in age. I do not like to bring this up because, frankly, it is a little over my head. It is either sheer genius or sheer madness, but since my 30th birthday is right around the corner, I am kind of keeping my fingers crossed that Stephen Hawking Jr. is on to something.
If you combine his theory of aging with his current thesis asserting that when he runs, he creates wind (therefore all wind in the world only blows when Connor Hill is running); I figure that the Nobel committee will be knocking on our door any day now.
In the meantime, I have a wedding to plan :)
Posted by Unknown at 5:35 PM