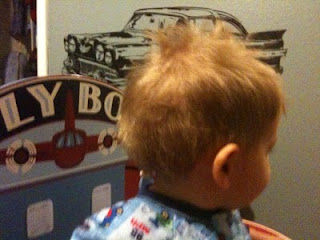 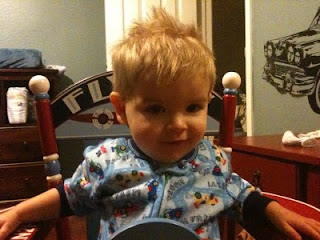 I would like to take today's blog to address something very serious. Hudson's hair. It is a mystery that I cannot seem to solve and it drives me crazy! It is kind of the blonde elephant in the room that we all tiptoe around until one of us finally breaks and says, "Good Lord! What is going on with his hair??"
Hud was born with a fair amount of dark hair and a natural tan, so in all honesty he looked fairly Hispanic. In fact, I was asked several times on the street if his father was in fact, Hispanic, or my personal fave the lady that commented, "Aren't mixed race children so beautiful?" Well, yes they are, but mine was just a white baby with a tan. Anyway, I digress. His dark hair never fell out, it just turned blonde and stayed baby fine. It got pretty thick so I kept expecting it to start acting like normal hair, I thought I could wait out the flyaways and the freshly electrocuted look, but no luck. I decided to not cut it in hopes that being longer would weigh it down. This was very hard for me, it really goes against my very nature. I have Connor's straw toupee cut every six weeks come hell or high water. But longer didn't work for us and instead of being seen as a boy with crazy hair, he was mistaken for a girl with crazy hair, often. That I could not handle, so we decided to take our chances and get his hair officially cut.
I entertained the thought of trimming it myself for a few fleeting moments, but Matt has some weird issues with home haircuts ever since his mom cut his hair herself with some sort of vacuum cleaner/hair cutting contraption. So he nixed the home trim idea and off we went to the "salon". Cutting Hudson's hair however, was not a challenge that the stylist had been properly trained for. She studied it dry, then she studied it wet. She finally looked at me and announced that she could see at least 3 cowlicks on his tiny baby head and she was amazed. Yes, this I already knew. I call it "the perfect storm" of hair. It defies gravity and all manner of styling products. She did her best, bless her heart and wished us luck.
We are back to the daily battle of trying to beat his hair into submission, but it is putting up a valiant fight. It is now part of Connor's morning routine, in the car on the not so cold mornings, to try and smooth it down with a wet wipe. This takes intense concentration on his part and usually ends up with him throwing the wet wipe at the windshield and declaring, "That's it, Mommy! I give up!" Once I even caught him stacking cheerios on one of the flyaway spikes like his brother was some sort of human ring toss. Hudson just waited patiently for them to fall in his lap so he could eat them. That poor baby :)
As confounding as his hair is, there are moments during the day when we are outside and the wind hits his face, blowing that crazy hair in 75 different directions, and his face completely lights up with a joy that I have never seen when I look in the mirror.
It is that face, in those moments, I hope I remember forever :)
P.S. If all else fails, I am sure he could get a job as a child actor playing a very young Rod Stewart in a lifetime movie that will likely be titled, "Maggie May: The Truth Behind the Hair."
Posted by Unknown at 5:02 PM