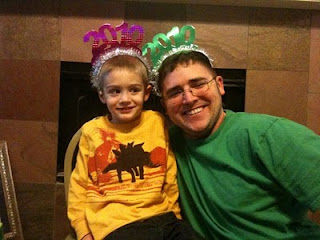 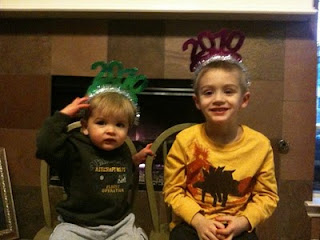 I guess a New Year's post is better late than never.
I cannot believe it is already 2010! 2009 flew by, our fastest year yet. It brought a lot of firsts for the Hill family. Hudson turned 1 and took his first steps which quickly turned into his first dance moves. He developed a real love of crazy baby dancing and can climb like a mountain goat because of his freakishly strong upper body and low center of gravity.
Connor turned 3 early on in the year and really came into his own personality-wise. He has turned into a tiny Renaissance Man who has developed a passion for a broad spectrum of all life has to offer. Over the past 12 months we have developed a love for theatrics, organic gardening, dramatic monologues and soccer( just to name a few).
In 2009 my boys became friends, and it is a wonderful thing. Now that Hud is a toddler, he can fully embrace his role as Connor's constant companion. They are now spending all day together at the sitters which is going to give them plenty of bonding time. Together they are quite the team. A song and dance man paired with a character actor. I think of a Jerry Lewis/Daniel Day Lewis combo :)
I don't have any real resolutions this year. Yes, I need to lose weight, exercise etc. However it is highly unlikely that I will do any of those things regularly. Instead I am going to chill out and try to stop worrying that my sons will be featured in a TLC show titled, "World's Tallest and Shortest Brothers: Can They Find Love?" (yes I realize I might need professional help). I instead resolve to enjoy every day with the three walking, talking and breathing blessings in my life.
In 2010 I choose to embrace the weirdness, laugh at the zaniness and learn my lines without fail for whatever production is getting top billing in my living room.
Happy (Belated) New Year!
Posted by Unknown at 6:09 PM