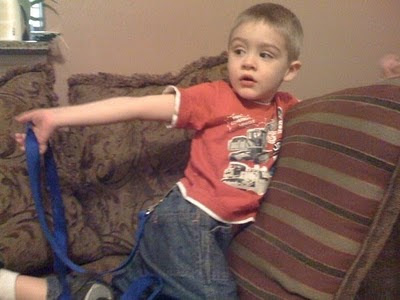 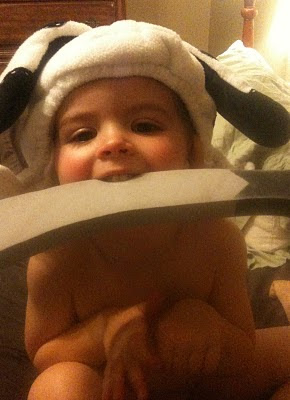 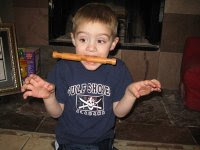 Since I have been absent from my blog lately due to a myriad of excuses, I was really torn about what story to share for my first post back. Should I cover our snow and ice days? Maybe the epidemic level sicknesses that we have survived this month? No, the answer was very clear to me. There could only be one story important enough to supersede all that other crazy stuff and that particular story is the arrival of Little Stuart.
Some of you might be familiar with Little Stuart's predecessor, Stuart the Dog. If you don't know Stuart the Dog, well, how nice for you. Stuart is Connor's dog personality and he has been around as long as Kenny. The distinction is that while Kenny is a separate, imaginary person, Connor IS Stuart the Dog. Slowly but surely though, over the last year, Stuart has slowly been separating himself from Connor and we talk more about him in the third person as opposed to the first. I started to have a tiny ray of hope blossoming in my soul, that finally, we might be getting rid of one of our weirdo characters. Alas, this was not meant to be. As usual, once I decided to allow myself that tiny shred of hope that we might soon stop talking to ourselves and hugging air, I found out that Connor has been laying the groundwork for his little brother to take over the throne of family dog. Enter Little Stuart.
Since I have had a kid walking around this house barking and wagging his imaginary tail for years now, it really shouldn't have come as such a shock when our two year old started panting and licking the windows. But it did. I thought that maybe, just maybe, at least 1/2 of my children that would resist the urge to be completely sucked into the world of odd. Don't get me wrong, I absolutely love that Connor is so super creative and smart, but a lot of times I just don't get him and I was kind of hoping that I could at least say I 'got' one of my kids. Connor, the devious puppet master, was thrilled. He and Little Stuart immediately dropped to all fours and started barking and wrestling with each other. FYI, Kenny was also overjoyed at the new addition to the family.
The following are some highlights of Little Stuart's personality. First of all he is absolutely so adorable you can hardly stay mad at him (Hudson also possesses this particular quality). He is particularly good at fetching things and if you ever instruct him to pick something up off the floor, he is happy to comply and will carry it wherever you desire, clutched tightly in his mouth. If I had to nail down a breed for Stuart the Dog, I would always have said some kind of sheep dog, a la the shaggy dog. I don't know why, but that is just how I picture him. Little Stuart is without a doubt a small breed, like a Chihuahua. I base this purely on energy level and the timbre of his bark. He can hear a siren ten miles away and will race to the nearest window, throw back the blinds, and let a yip, yip, howl combo that would put any purebred to shame. His favorite activity is to be walked on a leash, much like the original Stuart. It really gets his tail a waggin' to be hooked to that stupid leash. Never in all my life did I ever think I would be the kind of mother walking her kid/imaginary dog on a leash around the backyard. Yet, here I am.
Little Stuart also likes to wear his dog hat from Halloween two years ago. It is way too small and tends to rest on top of his head like a beanie, which contributes to the very distinct, possibly mentally unstable look.
I have included several pictures of both Stuart the Dog and Little Stuart taken several years apart so you can see how disturbingly similar these two animals are at their respective ages of two and half. That's two and a half in human years, by the way, not dog years.
Posted by Unknown at 4:35 PM