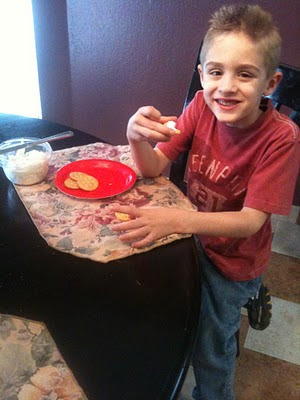 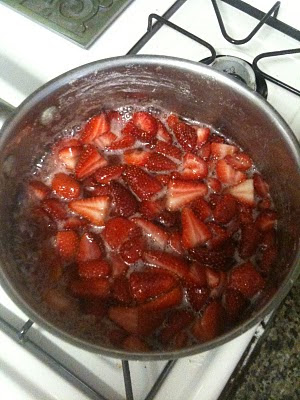 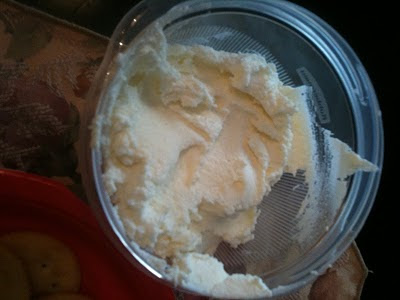 Connor came home from school last week practically bubbling over with excitement about a science project they had done in class. They made butter. He had memorized every thrilling detail and shared it with us with an overwhelming amount of joy. He was desperate to recreate this dairy magic at home. I checked it out online and it did look really easy so I promised him that we would make it a spring break project.
The wait for homemade butter has been almost interminable. I have heard the steps of butter making so many times that I could picture it in my sleep. When we went to the grocery store he flung open the refrigerated cases, giddily demanding the "milk with the most amounts of fat." He regaled his brother on an almost nightly basis with the most dramatic telling of the birth of butter that one could ever imagine. Obviously I had a lot to live up to. Since we were in this homespun type of mood I decided on a whim that not only would we make our own butter, we would go ahead and whip up some homemade bread and strawberry jam. Why not? I had been wanting to try Ina Garten's Easy Strawberry Jam recipe so this was the perfect time. You could probably already guess if you have ever met me, that I was in way over my head before we even started.
So. Today was the day that we were going to go all pioneer. Connor's enormously high expectations had me completely immersed in his world of delusion. I even started out the morning googling antique butter molds a la the strawberry mold Ma Ingalls had in the Little House in the Big Woods. You know, in case I want to get a booth at an artisan craft fair or something. Stop laughing.
First things first, I made my bread dough and set it out to rise. Easy. I am frankly feeling super good about myself at this point. Enter Connor dressed in what he considered to be appropriate butter making attire: jeans, flip flops, no shirt and a flannel robe loosely tied. Whatever, I couldn't let that distract me because we had some butter to create. Here is the basic plan for butter making according to my child and the internet: Put some really fatty milk in a shaker jar and shake it until butter forms. Then drain the buttermilk off, rinse the butter and then BAM! You're done. We hit our first hurdle about 1 and a half minutes into our endeavor. Combined, Connor and I have the arm strength of a 6 year old. Broken down, that means he has the strength of a five year old and I have the strength of a one year old and that is me being generous with myself. I then felt like I should have asked him more details about the butter making at school. How long did he estimate it took his class to churn out that delicious butter? About 40 hours. Wait, what? It turns out that his super smart teacher had each of the sixteen kids take turns shaking the jar. Well, isn't that convenient to have 32 arms at your disposal? Our four arms just weren't cutting it. After I thought we had put enough pioneer effort into it, we busted out the food processor and in seconds had butter. Thank goodness. Connor quickly spread it on his prearranged cracker platter and went to town. I headed back to my jam making. After all a pioneer mother doesn't get much time to rest. Since the jam recipe was titled "easy" that usually means intermediate to advanced to this home cook. It went okay. It all did what she said it would but we thought there was way too much sugar in the recipe so none of us really cared for it. So now we have about ten gallons of overly sweet strawberry jam, ten loaves of bread and a minuscule amount of butter.
I might hold off on the artisan craft fair.