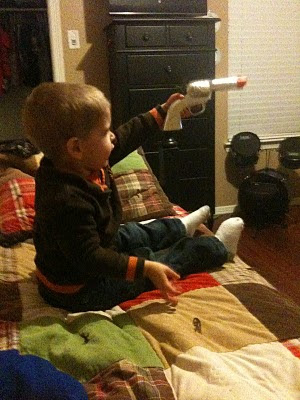 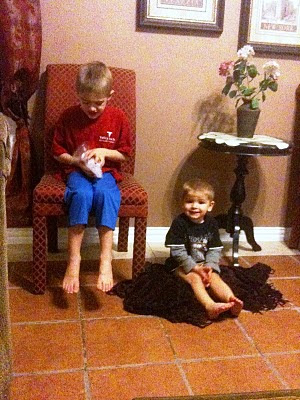 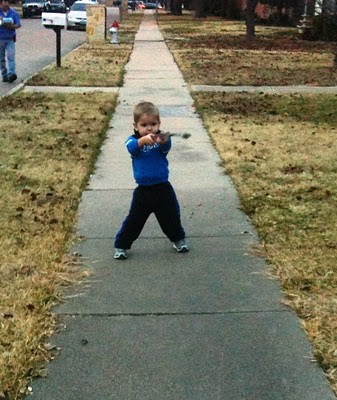 Lately I have been noticing that many of my posts have been Hudson centered. They usually veer into the "Good Lord, I don't know what to do with this kid" category. This would be another to add to that list. I love him more than I could ever explain, but often his behavior is beyond explanation.
Backstory 1: This family owns a single cap gun. I can't even really remember why it was acquired to begin with, but I am pretty sure that it was mainly as an accessory to Connor's rodeo outfit (You know we are all about the costumes in this house). We are not gun people. We are dull samurai sword people. It has never really served a function, it has never fired a cap and has been languishing away in the toy box for years. Or so I thought. I now know that it wasn't simply hidden away like a forgotten toy, it was waiting for it's true master to claim it. Much like in Harry Potter, where a wand has a way of choosing it's owner, the gun has chosen Hudson.
Instantly upon discovering his love for the gun, Hudson expanded his vocabulary to include the word "soot." As in, " I soot you." Lovely. He also has a very specific, slightly aggressive gun stance. Legs spread, brow furrowed, eyes afire. I can't say that I love it. This has been going on for a while and we have been working our tails off reprimanding him for threatening to shoot people. As sneaky as he is, he seamlessly transitioned into shooting everything else. The walls, planes in the sky and one nightmarish afternoon, his own son, Big Baby an act for which he at least showed instant remorse. But back to this in a moment.
Backstory 2: On a whim, I bought the boys the movie Hook for Christmas. Connor isn't a huge movie watcher and didn't really care. Hudson, being a second child and therefore an avid fan of the cinema, became hooked. He watched it every day, at least once during Christmas vacation. Sometimes twice. I know that admitting that here makes me sound like the laziest mother in the world, but when my choices boil down to 90 minutes of Hook or a 90 minute set on the drums.....don't judge me. Here is the thing though, Hook is not a cartoon and it kind of scares him. So he came up with the genius idea of watching the movie with his gun poised at the ready, hammer cocked, just in case he needed to protect himself. (Please see Exhibit A)). Whatever. He wasn't threatening to shoot any of us and he was happy. But as this odd gun, Hook, Hudson love triangle continued some more interesting details started to emerge. First of all, although it was truly Captain James Hook that Hudson is scared of, it is in fact, the mild mannered, middle aged Peter Pan played by Robin Williams that Hudson preferred to shoot. AKA the good guy and there was no talking him out of it. So Hudson had cast himself as a henchman. Fantastic. And not at all weird.
Now, fast forward to last weekend. Connor had the great idea of mounting a stage production of Captain Hook and Peter Pan in our living room. I knew in my heart of hearts that this was a bad idea, but they were both so gung ho that I just had to let the disaster play itself out. It was all going quite well, Peter came out in some of his little brother's pants in order to look the part (whatever that means) and Hudson came ready with his gun. There was a lot of chasing and "arghhing" and laughing so I decided that this might not be so bad after all. As soon as I mentally commended myself for having two bright and imaginative boys, the screaming started. James Hook decided it was time to cut to the battle scene and attempt to lop off Peter Pan's hand in retribution for his own hook. Sigh. I had to stop Hudson as he attempted to perform Connor's de-handing with his gun. Yes, you read that right, my youngest son tried to pistol whip his brother's hand off with a buck ninety-nine six shooter.
I had Matt take a picture of the crime scene (exhibit B). Connor is convalescing with his bag of ice and shorty pants and James Hook is sitting in time out bearing witness to his brother's pain. You can see who looks more upset. So, the gun is gone. I thought that might help dial down the anxiety I feel about being a victim of a cap gun drive by in my own house, but it hasn't. Although he has been denied access to the offending weapon, he has resorted to finding alternate guns. To date, they have included a wooden spoon, a baby carrot and a rather intimidating stick he found today on a walk (exhibit C and please note the stance). I am scared that he is going to start biting his bread into the shape of a gun. I can just picture myself in a school counselor's office saying, "Well, I'm not positive but I think it all started with a single cap gun...." Matt said I should worry more about a potential vitamin D deficiency as result of the inordinate amount of his life that kid spends in time out. I just don't know anymore.
Posted by Unknown at 6:32 PM