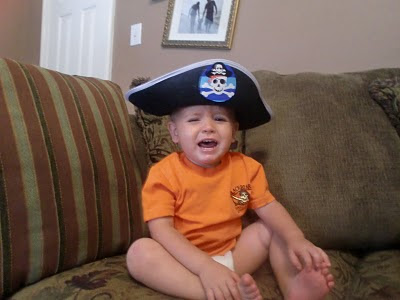 Oh the trials of motherhood. My little one has really been challenging me lately (or maybe always, I can't really remember). I would say that 90% of the time, Hudson is a precious, sweet albeit highly active little boy. The other 10% is what I would like to address today. Right now we are in a battle of wills and it centers on our afternoon pickup.

Neither one of my kids is ever super thrilled to be picked up by their mother in the afternoons and instead of taking offense to this (I swear they really do like me), I instead find it really comforting that they are so happy at Ms. Karen's that they don't want to leave. Since we have been back to school though, Hudson has been putting on quite the afternoon performance and it is driving me crazy! Apparently Hudson is a happy, well adjusted child all day long while I toil away at work, but the second I arrive to envelope him in my motherly love he turns into a holy terror. Literally I will see him in the window, playing nicely and cooperatively as pleasant as can be with not a 360 degree head turn in sight and BAM! he lays eyes on me and things get ugly. He turns into a tiny tornado of destruction, acting out and throwing a fit. Just what every mom wants in a welcoming committee. Now, I have heard a lot of people say that I should be glad that he acts good all day and at least saves the crazy for his parents, not the public and I guess I can see the logic in that. I just don't agree. I want him to act right in public AND at home with me! Obviously I want my kids to be well behaved 24 hours a day, so why won't they get on board with this program? I mean, come on! What is their problem?

So what to do.....I guess I could adopt the "it's the terrible twos" theory, but I don't really buy that either. I think if I say that he is just in the midst of the terrible twos that means I am discounting all the time we have spent in the terrible ones, terrible threes and terrible fours. We have survived some highly unpleasant stages in this house and have the battle scars to prove it. How wonderful would it be, if at the precise moment he turns 36 months (July 15th, 2011 at 7:31 am but who's counting), a switch flips, neurons connect and the demons intermittently possessing my sweet little boy are permanently exercised from his body. But I won't count on that little bit of magic happening. It never happened to me : ) I know this for a fact even without any evidence from my mother, but I am still guilty of falling into a funk that I can now affectionately call the Terrible 28's. Some days I just can't pull it together and I have a much bigger head start on dealing with emotions than my two year old son.

So we wait. We discipline, we guide, we attempt to reason and we throw our hands up in frustration and then we wait some more. I'm just hoping I outgrow it before my kids do :)
Posted by Unknown at 7:44 PM