K is for Kenny

This week Connor broke the news that he has been sneaking Kenny into school with him. This was a violation of the direct order I gave about taking imaginary friends to school, so I was disappointed at this revelation.

In the time leading up to school starting, Connor and I had several talks about how many new friends he was going to have in Pre-K and since there were going to be 13 other "real" kids to talk to, we certainly didn't need to bring our weird imaginary kid with us. Besides, he works part time at the donut shop and we wouldn't want him to lose his job because he decided to enroll in an institute of higher learning. We like to keep our imaginary friends dumb. I had heard a few random mentionings of Kenny during my daily interrogations after school, but none of it really made me think that he had been attending school until the afternoon when we were driving from my school to Karen's to pick up Hudson and Connor yelled, "Stop!! Stop the car! Kenny is running behind us trying to get in! I left him at school today on accident!" Naturally I assumed he meant he left him at my school (I don't want him there either, but we're taking baby steps here). So I pulled to the side of the road, rolled down the window and waited for Connor to give me the all clear that Kenny had indeed joined us in the car. Once we were on the road again, I heard Connor say to Kenny, "Sorry buddy, I forgot I left you in trapel today." Ignoring the mispronunciation for a moment, I thought, Uh oh, chapel? I then asked my creative intelligent oldest son if he had been taking Kenny to school and he was quiet for a minute and then said, "Mommy, I don't take him, he walks there by himself." Great. Then I thought, maybe it isn't so bad. No one probably even noticed him. So I asked if Connor had been talking to Kenny at school. "Of course, Mom, that would be mean to not talk to him."

Perfect! We are trying really hard to make friends and my four year old looks like a loon because he talks to air and not even cool air, air that is named Kenny.


He went on to tell me all the fun things he and Kenny have been doing at school. Oh how they have laughed and played. "We are learning so much, Mommy!" After thinking about it obsessively for the rest of the night, I decided to email his teacher. I am pretty positive that she seriously regrets giving me her email address, but it's too late now. I sent her a long email, explaining Kenny and apologizing for not being able to force my imaginary kid to stay out of the classroom. I really didn't want her to think that our kid was a freak because he talks to himself all day! She needed to know the whole story. I want him to play with real kids not imaginary kids that might or might not be 35 and intermittently employed. She responded and was very nice about it, but I can tell that she thinks I am borderline nuts, maybe even on the other side of that border. She said Connor had not only"occasionally" been playing with Kenny, but also sharing about him and encouraging other kids to play with him too. She thought it was wonderful. How nice for her. I think it is weird and I am even more weirded out by the fact that he is trying to recruit others to Team Kenny.

I just don't know what to do about all this oddness. Yesterday, I made sure I supervised Connor saying his goodbyes at the house to Kenny, b 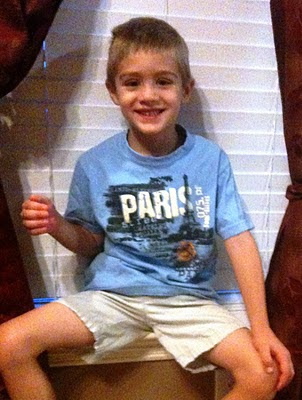 ut I can't trust that invisible little weirdo to do anything that he is told. I am afraid that I'm fighting a losing battle.

Here is a photo of Connor and Kenny. Yes, he has his arm around him and yes, I know it is bizarre.
Posted by Unknown at 7:35 AM