Glovie, new love of our life. 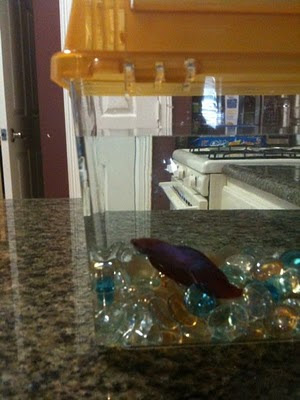 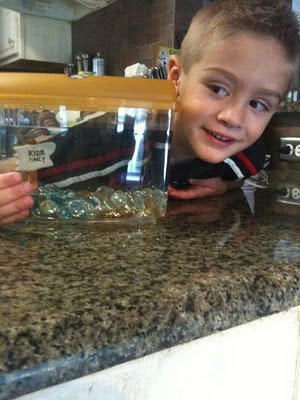 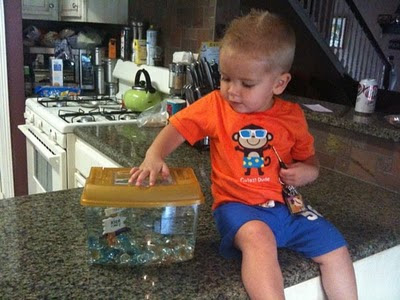 Well we have a new family member and frankly, I am not so thrilled. Connor has been saving his allowance for months and finally decided he wanted to spend it on a pet of his very own. Great. He first decided that he wanted to buy a baby puma, but I had to inform him that was too big of a stretch for his budget and it would probably end up eating his brother. So after a lengthy discussion of all the exotic animals we couldn't possibly buy, we settled on a beta fish.
Mom was secretly happy because they are a very solitary fish and thus, I will never feel the pressure of having to get Glovie (pronounced Glow-vie) a lifemate. So off to the pet store the three of us went, armed with two pockets full of quarters. Grand total? $11.00. Connor was giddy with excitement, Hudson was worried about lunch.
Once we saw the sad display of fish, swimming lethargically in their tiny cups of blue water, it was love at first sight. Connor squealed and pointed to the tiniest, runtiest, might be mistaken for dead he was swimming so slow fish and shouted, "It's him! That is Glovie, my new best friend!" He clutched the cup to his chest and hugged it, sloshing water all over himself. If that fish wasn't on death's door already, he was now about halfway to a heart attack. We asked our own personal Petsmart attendant (business was slow that day and I could tell they wanted to get rid of us as fast as possible) what we needed to properly care for this magnificent pink creature. Connor butted in and said, "Oh mommy I know. I am an expert on pink fish." Of course he is. We got Glovie some food, some drops for his water because goodness knows fish cannot swim in tap water, and then it was time to select a new home for this treasured family pet. I walked over and picked up a plastic aquarium the size of a shoebox with a locking lid. Practical, safe and a big improvement from the tea cup he had been swimming in. I looked around for Connor and saw him standing in front of a massive wall tank that easily had to hold 1000 gallons of water. This is the kind of tank that rap stars have installed in their bedrooms and filled with baby sharks. I overheard him say to that stupid fish, "this is your new home Glovie do you like it?" So once again, Mom had to be the bad guy and point out all the flaws in his plan. First, he was now down to $9 dollars after purchasing the fish, that tank cost $800, he had a lot more bed making to do in order to earn that much coin. Second, at the speed that fish swam it would take him many moons to make a lap in that tank and that would undoubtedly be a blow to his self esteem. And finally, since I highly doubt MTV Cribs will be stopping by the Hill house anytime soon, I was forced to qualify this tank as too gangster for Glovie.
He settled for the tiny plastic aquarium and off we went home to get our new family member settled. On the way home, Connor regaled his totally uninterested brother in a story about Glovie's parentage and hard scrabble childhood. Apparently, his parents were killed when he was barely a hatchling. His mother was caught and subsequently eaten by a fisherman and his dad died when some mean man poured oil in his lake (Don't say that we don't know our current events! Take that BP!) Glovie was left to raise all his brothers and sisters alone. He finally decided to run away and live in the pet store in hopes for a better life and an adoption by a boy named Connor. We don't know what happened to the brothers and sisters. So that in essence, makes us this orphan fish's saviors. No pressure there or anything.
Glovie made himself at home with only a little fanfare. I don't know if fish have ears, but if they do then I can bet that Glovie is wishing for deafness. Connor has kept up a running, one-sided conversation in which he has complimented everything about that stupid fish from his swimming abilities to his absolutely cute fins. He even pauses for Glovie to return a compliment (those character development lessons are really paying off here). The whole exercise is really annoying and if I am feeling the pain from listening to it, then I can't even imagine how that dumb fish feels.
I think it's probably a good thing we sprung for the bowl with the locking lid, otherwise we might have a jumper on our hands.
Posted by Unknown at 8:27 AM