The Family that Plays Together...

So, we've been trying to institute family game night around our house and so far it has debuted to mixed reviews.  You might be wondering what kind of parents have intentionally denied their children family board game time, but as with most weird stuff around here, there's a story there.

You see, Matt and I have several unwritten rules in our marriage; things that weren't officially part of our marriage vows but should have been.  The top two are as follows: 1) I promise to limit my own personal access to any and all microphones and 2) we will not play board games together.  Why no board games?  Well because one of us is grossly overcompetetive and the other is (in my opinion) flippantly accusatory.  True story: the last time Matt and I played a board game together was with my future in-laws in 2003.  Or as I like to call it, The Great Trivial Pursuit Witch Hunt of 2003, in which my integrity was called into question over a single card.  It started off so innocently: What is the state snack of Utah?  To which I instantly replied: Jell-o (followed by what might have been considered a celebratory in your face dance).  All hell then broke loose because apparently there is no possible way I could have known the state snack of Utah despite iron clad anecdotal evidence that included Bill Cosby, the 2002 Winter Olympics and a Today show segment (hosted by Katie Couric for crying out loud). Needless to say my multi-faceted, higher level explanation did not go over well.  I can't say I directly blame Mitt Romney, but if it comes down to him or Dr. Heathcliff Huxtuble, well...you know.
Anyway, I was accused of cheating, as if I spend all my free time reading Trivial Pursuit cards for fun.  I really and truly think the people in my life completely underestimate the sheer volume of absolutely useless knowledge I carry around in my brain. Sometimes I'm surprised I don't stagger under it's weight.

Flash forward to 2012, the board game moratorium has continued, an unholy and fragile alliance formed between my husband and I in order to protect our children from emotional trauma.  Don't get me wrong, our kids can play games with each other or they can play games with Matt or they can play games with me, we aren't cruel after all.  But as children are apt to do, Connor started questioning why we all just can't play together.  Enter a little game called Headbandz.  Connor loves this freaking game.  It's like 20 questions, but with the addition of individual headbands each player wears holding a picture card.  Then you have to ask someone questions, trying to determine what picture you are wearing based on their answers.  Fine.  There is no game board to overturn in anger, no currency exchanging hands and no random trivia.  We thought we were safe.  Enter Hudson. 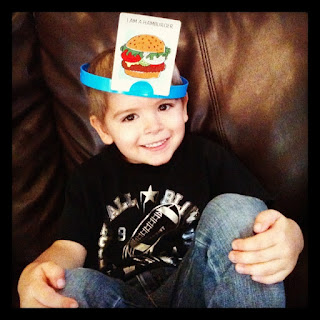 Now, Connor has owned this game a while and Hudson has expressed zero interest in playing, but now that he is 4 entire years old, he has to participate in Headbandz.  Since he has observed us playing in the past, we thought he had a pretty firm grasp on the question/answer format and we all quickly chose a card, loaded it into our headbands and gathered around to play.  It was like an episode of Leave it to Beaver....for about 7 seconds.  We started with Hudson.  I gave him some sample questions just as a reminder (Am I an animal?  Am I something you can eat?  Do I make noise?) and he nodded with a serious look on his face and whispered, "I ready."  After staring at our headbands for what seemed like hours he asked, "Am I aaaaaaaaaaa..........light bulb? "  No, you are not a lightbulb.  To which he replied, "Cause you are!"   Okay, time to revisit the concept.  No announcing what anyone else has on their headband. One new picture card for Mom and we're back to it.  Hudson's turn came around again and he seemingly went into a trance.  After forever he asked, "Am I aaaaaaaaaa....how you say it???? You know... it so beautiful?  I am aaaaaaaaa....flower?"  Nope, you are not a flower.  Cue immediate, uncontrollable laughter. I turn to look at Matt, wearing that ridiculous headband and he said in a defeated voice, "I'm a flower right?"  Yep.
As Hudson is up doing his victory dance in celebration of being able to identify what the rest of us have on our cards (because who gives a crap what he is actually supposed to be guessing) he announces, "I so awesome at this game!  I winned it!" Cut to Connor losing it.  Mr. Perfectionist had reached his limit and proceeded to flip out on his brother's blatant disregard of both rules and good sportsmanship.

Now it was really starting to feel like a Hill family game night.  Because we are grown ups, Matt and I each took a boy and tried to impart some quality parental wisdom.  You know, the good stuff like patience, winning with class, cheating with class, restraining oneself when one gets the urge to slap the headband off of one's little brother.   I felt like Matt and I were totally channeling Claire and Cliff minus the shoulder pads and funky sweaters.  After the group therapy session it was decided that our family is taking a little sabbatical from family game night at least until we find "our" game.  That elusive game that challenges our intellect, inspires healthy competition, yet doesn't lead to tears or blood shed.