I Gots a Hole in my Face Mom. 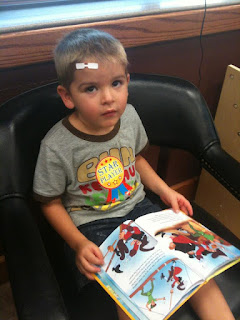 Last Thursday I got the news that Hudson had been injured at school.  Apparently while walking out to the playground, he wasn't paying attention (big shock) and a gate swung back and hit him.  If my little puddin' pop was an average sized child it would have undoubtedly bounced off his chest, but since he is nugget sized the gate latch hit him square in the forehead.  Ouch.  He was of course, quite upset but got over it remarkably fast.  He was back to eating gold fish in a matter of minutes.  The school nurse (or lady doctor as Hudson refers to her) recommended an urgent care visit and some stitches.
So off we went.  On the way out I asked Hudson how he was feeling. He sweetly replied, "I gots a hole in my face, Mom."  And that is exactly what it looked like, a hole right below his double cowlick, the area of his head I like to refer to as the dead man's zone because no hair dares to grow there.  I know in my heart there will be no hair coverage for this scar.

We arrived at the urgent care and went right back to see the doctor.  Hudson was having an absolute ball.  He had never seen such a wondrous, magical place.  Everything was amazing from the paper on the exam table to the books in the waiting room.  I really started to wonder if that gate had damaged his brain, because in all of his four years Hudson has never willingly or openly adored a piece of printed literature.  Scary stuff.  Hud was a champ while the doctor irrigated his newly acquired hole, keeping up a steady monologue of odd statements that kept the doctor laughing.  When the doctor backed up to examine the wound, Hudson looked down at the table where the saline had dripped off his head and down to the paper and said, "Oh my gosh......someones tee teed on this table."  The doctor laughed and said, "Oh that's just water."  To which Hudson replied in the most solemn voice, "No, it's not.  I can't know who did it, but someone peed here.  That disgusting."  Things kind of went down hill from there.

The doctor decided that it need one or two stitches to pull it all back together and went to get ready.  Hudson decided to check out the room and became obsessed with this poster on the wall.  He begged me to take his picture reenacting the scene. Yes, he wanted to take his shirt off, but no, I didn't allow it.  I have some standards. They're low, but they're there. But just wait, it gets weirder.
When the doctor and nurse came back in to do the actual procedure, he gave me the rundown on my role.  He said they would need all the help they could get to hold him completely still, especially while they were injecting the anesthetic.  His exact words?  "Get wherever you need to be to hold him, straddle the table if you have to."  Pause here for my hysterical laughter.  Yes, I have the sense of humor of a 15 year old boy, and second, I don't care if they were performing open heart surgery on my child, there was no way I was straddling that table.  After we cleared up that little issue and I finally stopped laughing, I perched myself on the edge of the exam table and held both of Hudson's hands.  I have to say, he didn't move a muscle when they did his first shot, but he was plenty ticked.  He yelled out, "HEEEEEEYYYY!" in his angriest voice.  But he didn't move.  After they were done numbing him up, he got ready to start stitching.  All of a sudden, Hudson yelled out, "Mom!  Kiss me!"  I quickly replied that I could give him a kiss when the doctor was finished, but that just wasn't good enough, "MOM!!!  Kiss my wips!"  Um, I love you Hudson, but I can't right now. "GIVE ME YOUR WIPS!" By now both the doctor and nurse are laughing out loud and when combined with the fact that I laughed like a mad woman at the word straddle, I am sure they had us pegged as a family full of stone cold perverts.

After what seemed like the longest 90 seconds of Hudson's life and one, count it, one stitch later we were done.  I am pretty sure that he might have needed two based on an earlier assessment, but I think that doctor wanted us out of there.  Hudson sat up, looked at the doctor and said, "I is so mad at you right now."  Then hopped down and walked out.

So what does it look like now?  Well take into consideration we are still growing out Hudson's last self hair mutilation, it doesn't look good. 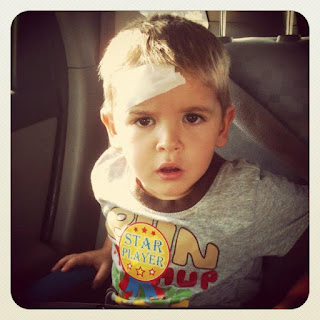 I like to think that it looks like he's been in a bar fight and after someone knocked him unconscious, they cut his hair with a dull butter knife. In other words, just another day in the life of the puddin' pop!