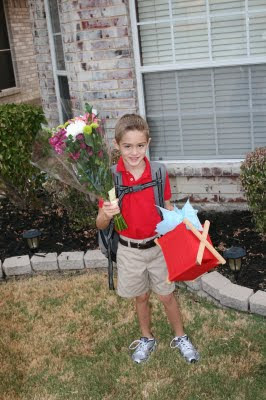 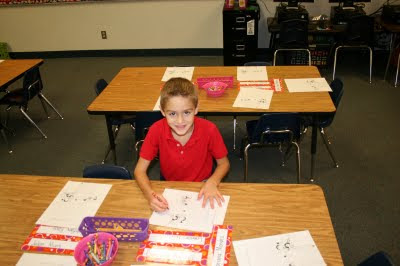 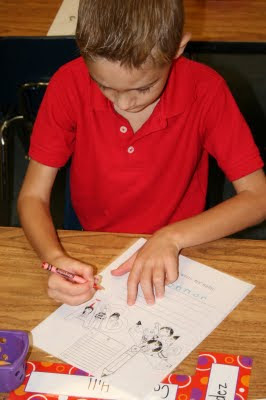 Okay, this is going to be a long and possibly nonsensical post. It has taken me a week to sort out my myriad of emotions and I think I can finally talk about something that I have been secretly dreading for a while now....Connor started kindergarten. As a general rule, I don't consider myself to be overly sentimental. I'm not a cryer and I can usually keep my emotions in check. At least I thought so. Having never sent a child into the scary world of public education, I had no idea how hard it would be!

Connor was ready. In fact, he was ready approximately 726 days ago. He has been thinking about, talking about and praying about school for pretty much as long as he could talk. Sometimes it is pretty obvious that people are born for certain things, for example I was born to become a ginormous fan of the Bravo channel. Connor was born for school. To my little boy, starting kindergarten was like coming home. While it was natural and easy for him, I was personally a nervous wreck. I could never fathom the depths of fear, uneasiness and worry that I felt sending my sweet, weird, old soul of a boy into the world. Combine that with the unpredictability of starting a new and totally different job and the loss of our comfortable routine and I was a mess. Seriously, I think I was about one more crying jag away from Matt crushing up sedatives and hiding them in my applesauce. It was such an odd mix of emotions because on one hand I could barely contain my excitement for C. After all, this was his dream! He got to go to school every day and learn in two languages! On the other, more sad hand, I was plagued with worry. What if no one wanted to be his friend because he is kind of weird. Or even worse, what if he acted like a know it all and all the kids thought he was a jerk. See what I mean?

None of this bothered Connor though, he spent the summer going about his back to school business like a pro. There was endless list making and starting around mid-July he began what Matt likes to refer to as the Connor Collection of Potential Scenarios. He likes to think through all potential experiences and make plans A-Z. This helps him feel prepared and therefore ahead of the game. These scenarios were then compiled into a master list for easy reference. (For those of you who judged me in the previous paragraph for calling out my own kid weird, I like to refer to this as Exhibit A.) He had potentials for all kinds of situations from the mundane to the extreme. After all, one cannot be too prepared. Can't get your belt unbuckled by yourself because it accidentally got glued shut? No problem, let me check the list. Ah, Solution C: It states you should always buckle only to the first hole, therefore enabling you to just pull your pants down in the restroom without any unfastening. Crisis averted. He really gets a kick out of list making although I think it might smack a little of OCD with a possible dash of neurosis. I only took one psychology course in college though, and it was a Friday afternoon class, so what the crap do I know. I did, however, watch a lot of Dr. Phil this summer, so I am keeping an eye on this particular situation.

So, back to the first day of school. It finally arrived! I woke up before dawn with a serious case of regrets. Why did I take a new job? Why did we put Connor in a program way across town? Life would have been so much easier if I had stayed put and brought Connor to school with me. Then I could have been in his business at a moments notice and we would have both been readily available for hand holding when either of us felt insecure. Matt was able to talk me off the ledge though, by reminding me that there is a plan for us and it isn't written on any list in Connor's drawer. My husband is so smart. And way less crazy. Our new kindergartner hopped out of bed, got dressed (with belt buckled to the first hole) and fixed his hair, "exactly like my daddy's."
He was ready. Matt got the privilege of taking him that first day. With my new job, it was going to be difficult to get away but more importantly it was really special for Matt and C to have that time together, so I said my goodbyes at home. Poor Matt, he left armed with a list of must take photos and the pressure of his wife's mental state weighing heavily on his shoulders, but I couldn't have done better myself. He even called and said in a whisper, "Ok, I have taken pictures of everything, including one of him breathing in and out. I'm pretty sure his teacher thinks I am creepy and wants me to leave. Can I?" He is so good!

Connor had put a mega amount of time selecting the perfect first day of school gift for his new teacher. Talk about a brown noser. First he really wanted to bring her some of his Gammie's homemade chocolate chip cookies. They are truly glorious, but I had to explain to him that as a teacher there is no way I would eat a homemade food gift on the first day of school until I determined how clean the kitchen is at home. That is new teacher 101. Next, he picked out two dozen roses. Good grief. We aren't proposing marriage to her! We just want her to like us, for crying out loud! He settled for a wildflower mix, some cool markers and a hand crafted card that ,of course, included a list. He was satisfied by that, not thrilled, but satisfied.

I couldn't wait for the day to be over so I could hear everything. I restrained myself from emailing his teacher for updates. I feel like I am walking a very fine line between normal parental concern and abusing the parent/teacher email system. Matt has limited me to one per week and absolutely zero between the hours of 11pm and 4 am because that is apparently when lunatics email. Or drunks. Whatever. So after the world's longest day my boy and I were finally reunited after school! He was so excited to tell me everything. He had an awesome day. He loved his teacher (who he says is beautiful), thinks his principal is hilarious (he pretty much is) and couldn't wait to go back the next day. YES! I was so relieved. He did however mention that he hadn't actually learned anything and that was a little disappointing. He visualized walking into the classroom, saying hello and starting in on two digit subtraction or something. I don't know, I don't understand how nerds think. I guess in the midst of all our preparation I forgot to mention that the first day of school is a weird one and lots of things have to happen, but it isn't a regular learning kind of day. I really can't believe I forgot that, because frankly I had been trying my hardest to crush some of his more outlandish dreams and help him focus on the reality of school. Before you think I am a creativity killer, let me just say that in one scenario his kindergarten class turned into a flash mob. No, he doesn't know the term flash mob, but after hearing him describe 22 five year olds spontaneously breaking into a semi-choreographed dance on the playground, I went ahead and drew that conclusion. Sometimes being his mother is very taxing. So anyway, after explaining to his parents that he hadn't really felt challenged academically on the first day he went on to describe his new plan. He decided to set a series of tasks to himself daily as his own personal homework. Fantastic. Task #1: Memorize the class rules. Task #2: Remember 4 names of classmates (and write them on a list). Task #3: Write his bus number and lunch number 20 times. Done, done and done. Luckily, the learning was on it's way and that has really soothed his restless brain.

So all oddness aside (and there is a lot of it to put aside) the first week of school has been fantastic. I am so proud of how easily he has adapted to school life and he loves his new school so much, it has already been immortalized in several lists. I am getting pretty used to the idea as well. I have managed to stumble through a few more hurdles, like the bus, and lived to tell the tale. I still feel like there is a Connor shaped piece of my heart walking around speaking Spanglish and creating school uniform pattern charts, but I think I am getting a little more okay with it every day. As Connor told me that first morning before he walked out the door, "I just can't stop getting bigger mom. I have to start kindergarten because I am trying to get ready for college."

Yes, I guess you are.