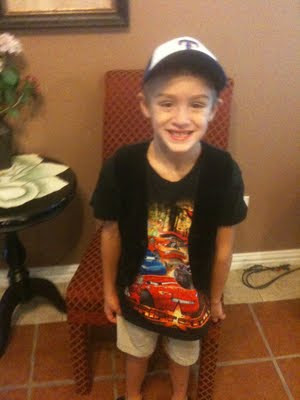 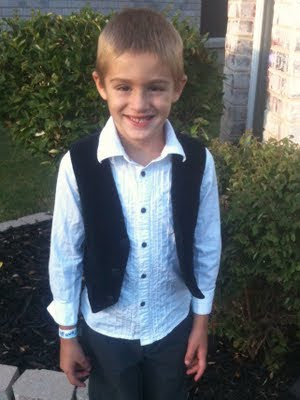 Oh the black vest. Where do I even begin. The black vest came into our lives innocently enough. It was part of a super adorable Christmas outfit. Connor looked so handsome and grown up wearing his red tie and black velvet vest. He picked that outfit out and just felt awesome in it. After the holidays ended, the tie and vest were retired to the back of the closet, but somehow that little vest kept showing up in the most random places. Matt and I came to the conclusion that our son had fallen in love with the vest.

The vest appeared anytime C felt like it was a special occasion. That could include a UPS delivery, a random visit from a friend or when his brother managed to actually pee in the potty. You know, the most special moments in the fabric of our family. The vest was automatically part of his stage costume whenever he and his brother decided to perform one of their shows featuring self written songs and elaborately choreographed dance numbers. What occasion could be fancier than that? You probably can't expect this out of most items of clothing, but that darn vest went with everything. It worked with t-shirts of sleeve both long and short. It also adorned t-ball uniforms and pajamas. And let's not forget the most unnatural of all vest pairings, black velvet vest and no shirt. I can't even type into words the classiness of that particular jersey shore combo.

So what's the problem? Matt and I try really hard as the parents of two ridiculously creative and sometimes pretty far out there kids to let them have some space to do their own thing. Even though my natural instinct was to steal the vest while he slept, set it on fire, then lie about it for the rest of my life (seriously, that would have been the most natural thing I had done all week). But obviously ripping the vest out of his life would be traumatic. We tried to reason with him that perhaps summer isn't really the most logical "season of vest". But he was so sincerely intent on impressing the general public with this vest and I could tell his heart was really in it. He felt so proud whenever he had that crazy vest on, it made me want to cry. So, back to the problem. We are now just mere weeks away from starting Kindergarten. I had to break the news earlier this month that his particular school wears uniforms. I might as well have murdered a puppy right in front of him. I never thought when we went through the process of testing and applying for kindergarten programs that standardized dress would have such a devastating impact on my weird kid. Out of all the kindergarten things I have worried about, and I have worried about a lot, this wasn't even on the list. The first words out of his mouth were, "But Mommy, I can't look like everyone else. That isn't me." Crap. After a minute of deep thinking on both our parts I then heard, "Oh my gosh. What about my vest?" Double crap. Now even though you and I know that even if he went to a school with free dress, there was no chance I was going to let the vest make an appearance at school. I think we have enough little eccentricities on our own without having to be "that kid with the vest" that others might be hesitant to make friends with. But he thought he was going to roll into that school with all the confidence in the world because he was wearing "his vest." As smart and tall and ready as my five year old seems to be, there is still a little guy who feels unsure hiding behind the vest.

So we have been slowly phasing out the vest. I think it might have been easier to get him off cigarettes. Connor, who loves to make lists more than he likes to breathe, has been hard at work on a list of occasions that would truly be appropriate for a vest. We are also working on a list of ways that he can show his awesomeness while still dressed like 600 other kids. This is hard for me, because I would have loved nothing more in elementary school than to blend in. But that isn't my sweet, slightly odd little boy. So we are working on it. Matt and I have talked about how that ridiculous vest is obviously part of all three of our journeys to get ready for the big wide world. It's funny the things that God uses to help us along the way. I can tell you that while my son was born ready for school, my heart hasn't been ready yet. But each day without the vest is getting us all a little closer.

Who knew black velvet was so versatile?