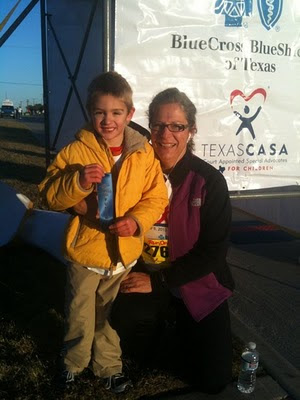 This morning Connor participated in his first fun run. He treated this event like it was the Olympics. Connor has always loved to run, so this short little one mile (approximately) jaunt seemed right up his alley.
Since this was his first foray into track and field I learned a few things about Connor Hill, professional racer, he has a list of things that are crucial to his success and they are as follows:
1. His get pumped up music. This includes one, and only one, song: Life is a Highway, performed by Rascal Flatts from the soundtrack to the movie Cars. He must hear this at least four times before he can run at his optimal level (watching it as a YouTube video is optional but a bonus).
2. His get pumped up food. The evening before the race he must eat as much as possible in order to "fill up his tank with fuel" This means he ate his weight in spaghetti and drank two full glasses of milk. His family is required to observe stomach and muscle size both before and after this meal to make sure we could see positive results.
3. An overabundance of self confidence. This event was titled "Fun Run", which Connor quickly renamed "My Race" and he declared himself the winner at least five days in advance. Halfway to the run this morning, he decided that he was over qualified for the kids run and should probably participate in "the parents run" with Ms. Karen (his running mentor and babysitter). This is a wonderful example of the Hill male's humility. He had already placed out of a division where he had yet to perform and promoted himself to the highest level. We agreed to work our way up to that though. His mission was not so much 'fun' as total domination of his competition. Oh, but he did have fun.
4. A fierce sense of competition. This goes hand in hand with number 3. His racing group was kids under 13 and some random adults who wanted to either run with their kids or didn't want to run the 5k. After Connor crossed the finish line, he let me know that he spent most of the race "trying to block a man pushing a stroller" in order to keep him from getting in the front. And by God, he beat that man pushing a stroller by at least 3 seconds (check the video). I can just imagine what that poor guy thought as he is casually jogging, pushing his baby and this crazy four year old making motor sounds keeps darting in front of him trying to cut him off. Near the finish line, a giant blue bear representing a healthcare company was waving and encouraging and handing out high fives as kids neared the end. Here is what Connor had to say about the friendly blue bear, "And Mommy, that bear tried to high five me, but I told him 'No! I'm winning this race!' I couldn't let that bear slow me down Mommy, because then that man with the stroller would beat me." That is dedication friends.
And finally 5. His secret weapon. What truly enables Connor to run the fastest and beat all but three other kids in the fun run? Wearing his Lightning McQueen pajamas underneath his racing clothes. He is kind of like superman like that.
Needless to say, I was overwhelmingly proud today. And cold. But definitely more proud than cold. I started to get a little worried though, after they left the starting line, because it was farther than I thought and he was totally out of sight for most of the race. He is, after all, only four years old and I kind of thought I would be able to see him the whole time. I started to imagine him getting a little tired and not being able to see anyone he knew and getting upset because again, he is four and four year olds tend to do things like that. But a mere nine minutes later, there he was, giving it his all and he crossed the finish line with a giant smile on his face. I don't think I could walk to my car in nine minutes without taking at least two sit down breaks. I love that kid with every ounce of my being and if I have to stand in the freezing cold to cheer him on in the other 92 races he has decided to run this year, I'll be there with bells on.
Really, he has set his personal racing goal at 92 and he is nothing if not an over achiever.
Posted by Unknown at 6:01 PM