As most of you probably know, in January, Hudson cut his own hair.  Not just a little bit, a lot.  Right in the front.  Actually, if you want the specifics, he removed his double cowlick down to the scalp.  He thought it looked awesome.  Standing in front of the bathroom mirror brushing his teeth those were in fact his exact words, "Oh my gosh.  I looks so awesome."
You might be wondering what kind of parent leaves her child unattended with scissors and to that I say, "This kind of parent and you have obviously not met this child."  He is always on the lookout for "fun" and even though we try our darndest to keep sharp objects out of his reach, he has a special gift for finding them out.  So after the great hair massacre I was faced with the dilemma of fixing his handiwork.  This was tough and we got a lot of suggestions the most common being buzzing it all off.  This wasn't going to work for me.  I have spent over three years cultivating one of the the strangest heads of hair you could ever imagine and finally got it long enough and trained enough to lay flat.  No way was I starting over on that hot mess.  I decided that I could just wait it out.  After all, when he ran around outside and the wind blew, you could hardly tell that he was missing at least 1/8 of his hair.  Plus he's super cute, so that has to count for something.

We lasted almost four whole weeks and it started to feel like we were living that old adage, watched pots never boil.  Apparently watched hair never flipping grows.  So the day after Valentines I decided to take him in and see what could be done.  We went to our usual place and while Connor was getting his straw toupee trimmed, Hudson took a seat in the adjoining chair.  His conversation with the stylist went like this.  "Hi Hudson, did you cut your own hair?"  "I did.  I do so good."  "Well it looks interesting, can I trim it up for you?"  long pause for a moment of quiet reflection "I trim it now.  You give me scissors?"
Oh good grief, I felt like it was time for me to step in before he batted his eyelashes and she handed over the scissors.  This might be the right time to mention how my three year old pronounces the word scissors.  If I have to make a comparison, I would say he sounds exactly like the Taco Bell chihuaha.  See-zors.  As in, "You give me see-zors?" There, I wanted you to have that visual, now back to the salon.  I could tell that this poor girl was feeling stressed even though I tried to be very upfront in my expectations.  I wasn't looking for a miracle, I just wanted some blending.  She got to work and it hadn't been five minutes of snipping when she stopped and announced, "I don't think I can do this.  It is just too short in that one spot."  Again, being the laid back and no-pressure parent that I am, I reminded her that we just wanted her to try her best and frankly the last person that cut it was a three year old, so really our standards were pretty low.  After a couple of more minutes she brought in a couple of more ladies to consult.  So at this point Hudson is lapping up the attention with a spoon while three women fawn over him and rub his head.  They decide that maybe cutting it dry would help, so out came the blow dryer.  This entertained the crap out of Hudson.  Once dry, the analysis continued along with a few tentative snips of the scissors.  No wait, it definitely needed to be wet again.  Snip....snip.  It was taking forever and frankly by now Connor and I were over it.
After another ten minutes she turned to me and said, "So, do you want to keep the sideburns?"  For some reason I found this question hilarious and started laughing like a lunatic. I told her if it was possible to transplant the sideburns to his forehead then please by all means go for it, if not then I consider sideburns to be the very least of our problems.  On it went, this never ending haircut.  She kept muttering to herself and I could tell we were slowly breaking her spirit.  We seem to have a natural talent for spirit breaking and sometimes it truly doesn't feel like a complete day unless we have made someone question their life's calling.

Finally!  She finished/gave up and whirled him around along with the disclaimer, "I am so sorry this is the best we can do, but I think it looks ok?"  Hmm, I thought ok was a pretty generous adjective to describe what was happening on top of that little angel's head.  Was it worse? No. Was it better?  Absolutely not.  It was just a whole different kind of bad.  Now instead of a big chunk of hair missing, I had just paid $16 (plus tip) for my preschooler to sport a five-head.  You know a forehead that is so gigantic it has to be called a five-head?
So we are back to waiting for tiny blonde hairs to grow.  I am not that great at patience and it certainly doesn't help that every time I look at his hair this is what I see..... 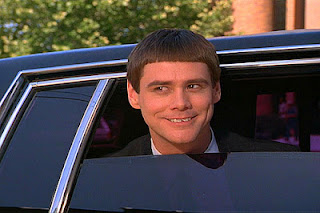