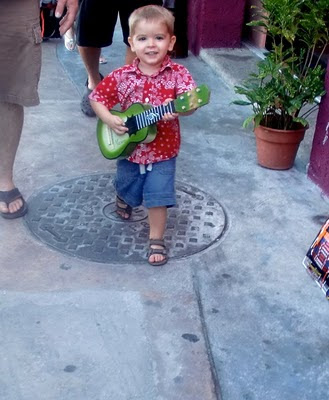 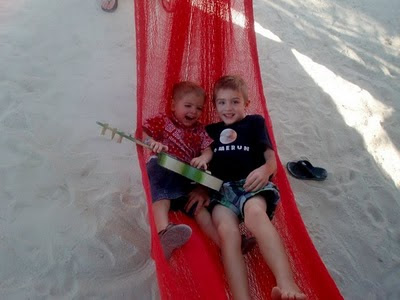 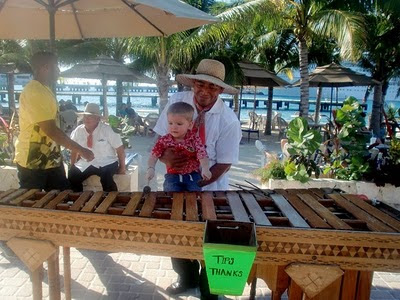 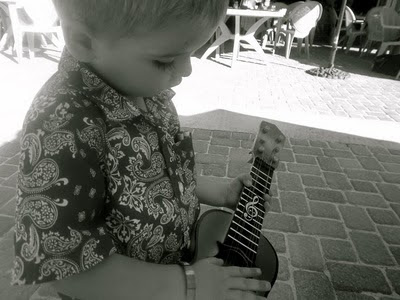 The highlight of our jaunt into Cozumel had to be the acquisition of a tiny guitar. First of all, there were souvenir guitars everywhere and Hudson was so excited, I was worried that he was going to stroke out. He ran around frantic yelling, "' Tar! Tar! My tar!" We tried to put him off for a while so we could shop around a little more, but finally we broke down and Susanne bought him a little green number with the words Cozumel Mexico inexplicably framed in quotation marks. As an instrument it possessed absolutely no redeeming musical value. Not that he cared. All of a sudden he was Jimmy Page, Stevie Ray Vaughn and Eric Clapton all rolled into one 26 pound body (Minus all the rock and roll druggie drama of course).
That little boy's eyes lit up and he set about to entertain on the streets and sidewalks of Cozumel like it was his birthright. He was a strolling troubadour, strumming that cheap fishing line and singing his little heart out. What was he singing? Hard to say. There was definitely a rendition of Toot Toot Chugga Chugga Big Red Car, but it was also mashed up with a lot of other indecipherable melodies and lots of woo-ing a la Micheal Jackson. Every 20 feet or so he would strike a pose, raising the neck of the guitar high in the air, and hit a high note that seemed to last forever. It was adorable. Connor, Dr. Literal, pointed out that it was obviously too small to be a real guitar so he was positive that it was a "Kookalele." Um, a what? "Mommy, a kookalele. It is a different instrument than a guitar but it looks like one but it is very small and sounds different. They play them by them the ocean." Oh that makes perfect nonsensical sense and fitting since we looked like a band of kooks following this kid around town while he played a guitar that produced no sound.
By now, in a city full of touristy cheesy attractions, Hudson had become the greatest attraction of the day. Everywhere we walked people came out of their shops and stopped to watch him perform. He ate it up. He had a perma-grin and totally fed off the audience. We met up with the rest of our traveling group at Pancho's Backyard for lunch and I thought the Mush would take a break to eat and relax for a while. Nope. On the patio, there were two men playing a beautiful hand carved marimba. It was like a moth to a flame. Hudson is not the most easily understood verbally, but I imagine in his mind he was saying the following as he moseyed up to them, "Hey guys, it looks like you need a guitar player over here. I know every song ever written and I'll split the tips with you. Okay, let's jam." And jam they did. Those guys were so nice to Hudson even though he was the stereo typical hot shot band member who wanted all the spotlight and gave very little credit to those backing him up. You know, those unimportant people who can actually play on real instruments that make actual sound. That was no matter to Hud though, he played that piece of junk guitar, held together by hot glue and fishing wire, like it was a vintage Strat. It went on for several hours and he even earned tips from his "public." Strangers were stuffing dollars into the pocket of his bandanna print shirt. It was a little disconcerting. Again, I cannot stress how nice those two marimba players were. Once, I turned around to see Hudson interrupting a song in order to have one of them tune his guitar and the man ever so patiently turned and adjusted that fishing line until it was in tip top shape. Then later,at another point, they had hoisted him up so he could play that dang marimba! It was all too much.
All in all, Cozumel made quite the impression on our two year old and I dare say that he made a similar impression on them. And for those of you worried that the kookalele wouldn't hold up, don't panic. It is still in one piece and getting plenty of love back here at home. When I say love, I really mean it, hr hugs and kisses it every night. I am sure that is exactly how Stevie Ray started out.
Posted by Unknown at 8:03 AM